An illustrator crosses over and becomes a writer.

Today I want to introduce my friend Aurelio O’Brien, who opened my eyes to the art I’d always enjoyed but without recognizing the artists behind the work.

Aurelio has had a long career as a graphic designer and recently tried his hand at writing. His science fiction debut tells the story of a future society of humans living in a luxurious, genetically-designed paradise of eternal health and ceaseless pampering. But what happens when one member of this society desires (and designs for himself) a deliberately ordinary woman? That is the basis of EVE.

Most writers don’t design their own book cover, but you did. Tell me how this came about.

I was actually a professional graphic designer and artist long before becoming a novelist, so it was a bit like hiring my old self to work for my new self. Also, self-publishing gives you the freedom, okay burden, of doing everything yourself. I didn’t approach the cover until the manuscript was already finished. I do visualize a lot when I write, but I think writing and drawing use different parts of my pea-brain, and I could only focus on one thing at a time.

It’s funny, I started writing to have an alternate creative outlet to the art thing, so at first I was apprehensive to do all my own artwork. I worried it might feel like I was going backward, but then realized I don’t have to do just one thing exclusively.

Show me a little of your thought process with designing the cover.

These were some alternative cover designs I did for EVE . I wanted the final cover to be simple & graphic, eye-catching, and cause people to wonder what the heck the book was about, so they’d pick it up and check it out. The first was a satirical homage to Michelangelo’s Sistine Chapel painting of God creating Adam. I actually liked this one a lot, but when I tested the covers, people overwhelmingly preferred the final one with all the odd creatures. 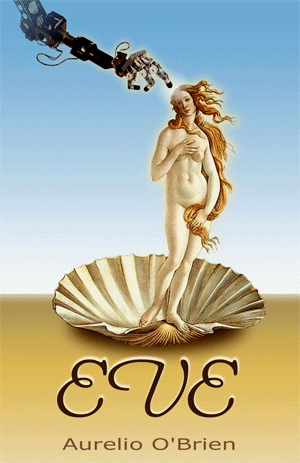 The second played off of the idea of the character Eve being a product of genetic manipulations. This one doesn’t read very well, and was probably the least visually successful attempt: 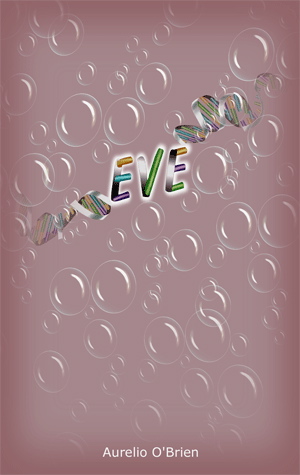 Then I tried for a cover that would simply demand attention on a bookstore rack. This one makes the least sense as far as the book’s content. I like it, but I can’t really explain why, which means it’s probably not very good. 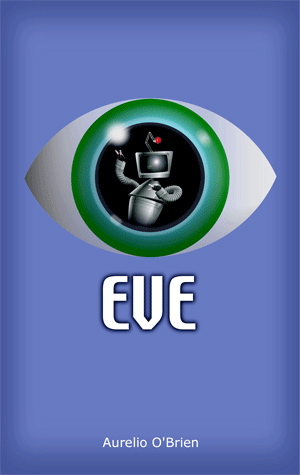 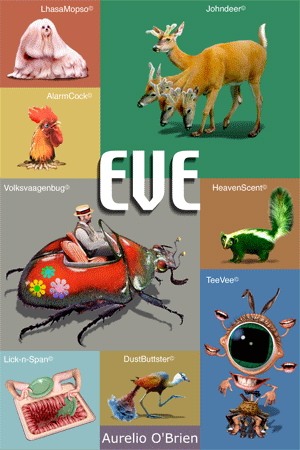 This cover approach led to the idea to animate the creatures on my website and use them for advertising purposes. I have even had an appliance and a houseware company ask me if they could link to my site. Things like that crack me up because both times it seemed like they actually though that my products existed.

Were you a good boss to work for?

No! Not really! Any artist will tell you that what you capture on the canvas or screen rarely ends up exactly like what you sees in your head. When I am doing work for someone else, I am trying my best to get the image they want, so once they’re happy I’m happy and can let it go. With myself, I keep looking at the work and fiddling, hoping to close that gap between the mind’s eye view and the finished image.

How did you decide what these creatures would look like? What inspired you?

The world of EVE is pretty surreal, so artists like Heronimous Bosch, Rene Magritte, and even Dr. Suess had an influence. 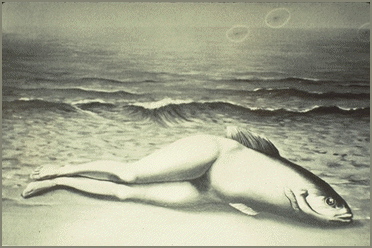 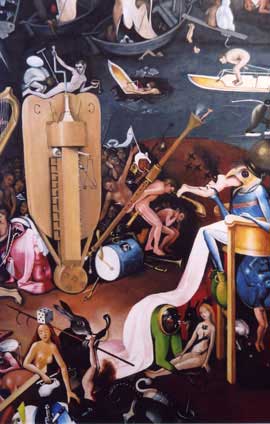 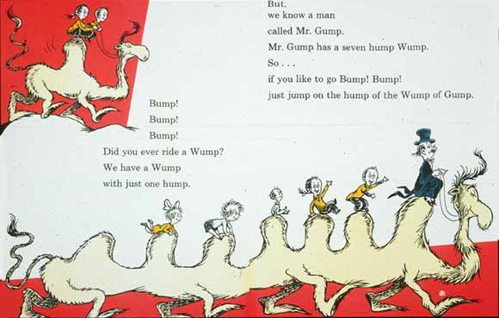 I wanted a kind of marriage of creepy and cute, like, they are all appealing to look at but eerie at the same time. I think the Lick-n-SpanÂ© says it all:

Lick-n-SpanÂ© – Its antibacterial tongues slurp your dishes clean without spotting! Now with ScrubbinBuds!

Why did you decide to also animate the creatures that appear on your cover?

Well . . . I knew self-published books are generally considered pretty ignorable, so I thought, “What will get people to have to look at my site?” It’s like that song in Gypsy – “You’ve Got Have a Gimmick!” (I was fortunate I could hire myself for free because if I paid for my own animation I couldn’t afford myself.) I taught myself Flash with the book FLASH IN 24 HOURS. It was a LOT of work but a kind of a hoot to do too, because I was a one man studio. I did all the voices and vocal sound effects – crunching celery sticks for the JohndeerÂ© and overdubbing 4-part harmony for TeeVeeÂ© That was tricky. But it meant I had no copyright problems or that I would need to get any signed releases from actors.

Tell me more about the copyright issue.

The copyright issue is a big one for animation artwork or really any artwork for hire, and believe me, it’s a hassle with most of my animation work being “owned” by the studios. When you sign on to a picture, you sign away your rights to any artwork you produce to them exclusively. On top of that, with “making of” film art being sold for big money to collectors these days, the studios get extra paranoid and greedy about it.

One picture I was on, they tried to limit my own access to my own artwork while I was still using it – in other words, they took my artwork away from me and locked it up before I was done using it for its actual purpose, as visual reference to make the friggin’ movie! It got more than a little surreal. Some studios have even tried to prevent artists from using artwork in their portfolios too, which is pretty crazy.

Any use of contracted artwork must be negotiated with the owner – the studio that paid you for it. That’s why I wanted to control all the artwork, animation, sound work, etc. for EVE and my website, so I generated it all myself. We’ve all seen when people do something that suddenly becomes successful, everyone suddenly wants a piece of it. I didn’t want those potential hassles, and besides, it was a whole lot of fun to do it all!

Did the gimmick work?

A: Hmm. Yes and no. When I first published it my site got linked on some popular sites like Boing Boing and such I had hits in the millions in the first few months. It was crazy! The site went HUGE and I had to upgrade to a professional-grade server. But all the attention didn’t sell that many books – most people came to play the animation and then left. I think general awareness of my book is quite high though thanks to the site, so it’s opened doors in that respect, and it really helped tremendously as a calling card when I solicited reviews.

Will you do the same thing all over again on your next novel?

Maybe. I’m still heavy into the writing, so I haven’t thought about it yet. Different part of the brain thing.

Thanks to the generous and oh-so-fun-to-tease Aurelio O’Brien for hanging out with me on my blog!

Of course, when I asked Aurelio to send me a photo of himself I could post on my blog, he could not send me an ordinary headshot. 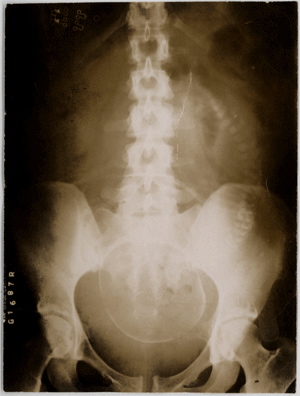 This really is a picture of Aurelio as a young tyke, and I’ll end on that note.