What? You don’t know I run sporadic contests with mystery prizes attached? Well then, you should visit more often. I’ve given away all kinds of swag, and sometimes my winners opt for an interview.

So what did Jeff Swanson do to win an interview?

His words: I was all set to help you out with that word, then found that I had also been misspelling it all this time. Dammit, I hate it when that happens. I’d been spelling it “camraderie,” but it’s really “camaraderie.” So it’s “camera” spelled with all a’s, Stephen King’s favorite location “Derry,” only spelled Frenchy with an ie.

I could spell it a million times, and not just because I’m cut and pasting! 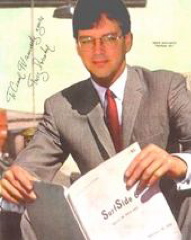 I did some snooping on Jeff before our interview, and he’s got a little spunk to him. You’ll notice that right away if you visit his blog Wordlings.

I’m actually . . . I actually hate the workshop process. Uncredentialed fellow failures telling you what’s wrong with your work? Presuming to point out why your work isn’t successful? You show me how a failure can tell you how to be successful! You show much something workshopped, and I’ll show you something that’s been sanded down into mediocrity!

Oh, sure there are exceptions. Generalities like this never hold up. But not as many exceptions as you may think. Failures can give successful advice and vice versa. Nobody really knows why anything succeeds.

And now here he is, and here come my questions.

I sell computer-based training on the Internet. It was my parents’ business, then they retired and now I do it. It’s a one-man show – I program it, sell it, and ship it . . . good thing about that is, there’s only one guy to pay!

And how do you fit in time to write?

Some years ago I resolved to sit down every morning and write from the moment I woke up until noon. Before long it was a habit, and now, though I don’t always go till noon, I always sit down and write every single morning.

When did you know you were a writer?

In 2nd grade, when I discovered the godlike power of putting your fantasies on paper! After that I took some time off, then returned to it in 7th grade. 30 years later, it’s still with me. It still amazes me how we can do that, how it’s actually allowed.

Talk to me about wordlings.

In 1998, my fiction was trickling out and I just didn’t know what to write – and I couldn’t write unless I knew what I was going to write. I only knew to write things which where very structured and controlled and realistic. It was very frustrating, because I had a lot of big plans and crazy ideas I wanted to treat and explore. Then I read Ray Bradbury’s Zen In The Art Of Writing, and something clicked – I took his advice on writing free associationally, and ran with it. Something was finally unlocked, and it all just exploded out. It got so good to me that I decided this would be my oeuvre.

How would you describe your writing? Is there an identifiable theme or style in your body of work?

I don’t think so, because I mess with all sorts of themes and write in all kinds of styles. That’s the whole thing about the writing that I do – I wanted to write so many different kinds of things that the tangled urges were more or less choking off my flow. So finally I decided I’d write everything. A little snippet at a time. That kind of A.D.D. writing really appeals to me, and always keeps it fresh for me.

There are so many things I like to write, but here are a few: I like to explore genres and fool with their cliches; I like to invent mythologies and mess with gods, avatars, fictional characters and historical personages; I like to explore the supernatural and philosophize impiously; I like to combine words for the pure music of them, then find and explore connections suggested thereby; I like subversiveness and rudeness and to shock people, and crack open heads with quantum leaps of logic and realities juxtaposed with weird irrealities; I like to write what seems like nonsense, but is actually animated with a kind of strange symmetry that seems to lie in the words alone, a symmetry which seemingly arises of its own accord.

Mainly I write for the fun of it, the idea being that if I have fun, then that fun will infuse the piece and transmit to an audience.

Is there a market for wordlings?

There’s definitely a market, if my web hits are any indication (and yeah, though the search engines seem to love my work, there are also actually human eyes on it). But I suspect it’s a small, select market. The fact that there are devoted fans of Borges and Calvino and all sorts of other non-standard writers, that shows me there are fans out there waiting. And I’ve met plenty of people who like an enjoy what I do . . . their encouragement has made a world of difference. So yeah, there’s a market, but I’m not imagining it’s Da Vinci huge or anything.

What do you feel about the publishing industry and the market these days?

Doesn’t appeal to me. The entrenched systems and the middlemen and the long lead times are cumbersome and unwieldy. For me personally, I need to keep the economic imperative out of what I write . . . that’s how I get the stuff that pleases me the most. On the other hand, I do write scripts and am still in break-in mode, so I’m very in tune with commerciality, structure and accessibility. My goal is to strike a balance, somehow, between the two worlds; to marry flowing freaky originality with structure and a resonant, identifiable sensibility. There are those doing it already: Charlie Kaufman, for one.

When I won (along with collaborator and friend John Dart) the ASA/Writer’s Digest Screenwriting Competition in 2004, got interviewed in Writer’s Digest, and traveled to the Austin Film Festival to receive an award. Otherwise, it’s whenever some weird and astonishing piece of writing just takes shape under my fingers . . . something I never could’ve anticipated when I woke up that morning. 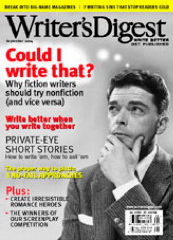 What do you find maddening about writing and about this business?

Trying to reconcile my yearning for form and control with my unshakeable devotion to spontaneity, rawness and serendipity. Too much of one screws up the other, and I drive myself frickin crazy trying to find a balance.

Do you have any advice/tips/lessons learned to pass along?

Writer’s block does not exist! I have proven this time and time again. Anytime you feel blocked, you can always write. The only block is the disconnect between what you think you should be writing and what your soul wants to express.

Who are your favorite writers?

Where would you like to see yourself in five years?

Living in a decent little paid-for house by a body of water, with nothing on my plate but endless time to explore all my littlest avenues.

Oh, hey – one more: What inspired you to graph your head to that body in your bio photo?

Oh, that’s just me taking a break between scenes when I played Sandy Winfield II on the TV show “SurfSide 6” in the early 60’s. I know, I know, I still look the same . . . it’s the damnedest thing, and people recognize me all the time! I tried going out in a disguise, but it never works . . . some old biddy always sees right through it!

If you think Jeff Swanson is a cool guy, or maybe you wouldn’t say cool but you’d say an interesting rascal, be sure to click here.

Folks, I’m seriously behind on my mail, so be patient with me. I’ll catch up as I can. Thanks! And don’t forget to talk to your fathers today.