Have you ever wondered what it would be like to live with another writer? Would you critique each other’s work? Share office space? What if you work at different paces? Today I have a unique interview with two writers who are engaged to be married: Kelly Braffet, author of Last Seen Leaving and Josie and Jack, and Owen King, author of We’re All In This Together.

They agreed to interview each other, and it’s really fun to see the final product because, not only do you learn about some terrific books, but you learn about their chemistry and the ups and downs of having the same profession. But first you need to know how they met . . . . 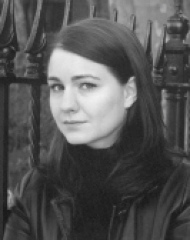 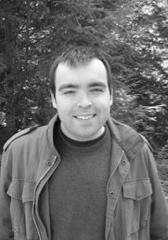 Kelly and Owen met in graduate school at Columbia University in 2000. Kelly likes dragons, video games, The Philadelphia Story, and books involving sex and murder. Owen likes zombies, baseball, The Third Man, and books where people act silly. They both love cats. Owen and Kelly live together in Brooklyn.

The only thing cooler than Owen’s writing is Owen himself.

His first story collection, We’re All In This Together, is peppered with dark, weird, wonderful characters. The backbone of the collection is the title novella, which is the story of George, a kid living in a world populated by extremists. (Which, hey, has got to seem familiar to anybody who’s, you know, alive right now.) George’s grandfather is a former labor organizer fighting a slogan war with a paperboy who makes up a full half of the local ROTC chapter, and his mother works at a Planned Parenthood clinic, where she fights her way past the protesters every morning. In the middle of this chaos is George, who’s really just trying to figure out a sane road through the disappointment of everyday life. That makes it sound like kind of a pessimistic story, but it’s actually a brilliantly conceived coming-of-age fable that clearly demonstrates the subtle human cost of fanaticism of any sort.

But my favorite thing that Owen has ever written is a short story called “The Cure,” which will be published in an anthology of short fiction inspired by songs (Clef Notes, check it out later this year) and I’m not just saying that because the love interest is a lot like me. It’s the story of a self-contained, self-employed, self-educated man who slowly starts to realize that there are some things he can’t do on his own. It’s inspired by a Cure song, it contains some of the most brilliant prose poetry about mutant chickens that you’ll ever read, and the end will make you cry. What more do you want? 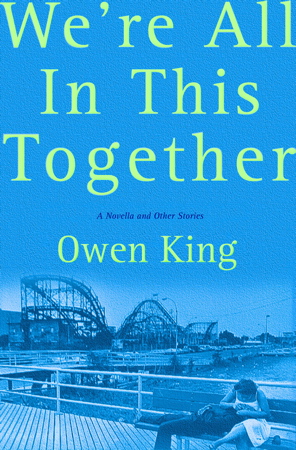 Well, first of all, Kelly’s writing is brilliant.

Her first book, Josie and Jack, was about an eponymous pair of siblings, who are equal parts charming and diabolical. Without giving too much away, our anti-heroes cut a swath from rural Pennsylvania to post-industrial wasteland Pennsylvania, and finally to New York City. There’s crime and sex and a whole lot of grime. As literature, it’s disconcerting, indelible, and as crisp as a new dollar bill. As entertainment, it’s everything you could want for the beach, the subway, or before bed although be warned, unless you’re extremely strong-willed she’ll keep you up past your bedtime.

And Kelly’s new book, Last Seen Leaving, is even better. It starts off as a mystery, Anne Cassidy’s search for her estranged daughter Miranda, and turns into something a whole lot bigger, taking in questions of identity, questions of memory, and a very unpleasant chapter of American history. 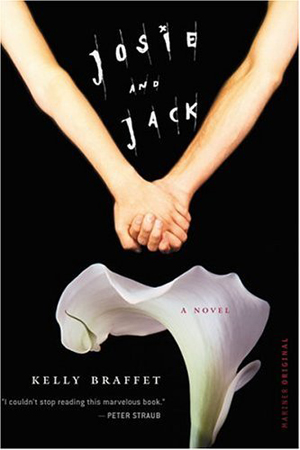 What’s the best thing about having a writer for a partner?

There’s so many things, I need to list at least three:

1. She understands that writing requires constant fuel – sugar, Triscuits, hugs. At unpredictable times, Kelly often pops into my office with these things.

3. She’s sympathetic to the primary difficulties of the job, rejection and uncertainty.

What he doesn’t mention is that I think Triscuits are gross, and so my primary purpose in delivering them to his office is to watch with fascinated horror as he eats them. Seriously. It’s like watching somebody chew their way through whole-grain fiberglass insulation. Ewww.

We’re incredibly lucky to be able to share what we love with who we love, and I could write an entire book about why. But since Owen limited himself to three reasons, I’ll do the same.

1. Before we lived together, the phrase “I can’t come over tonight, I have to write” was never once – in four years – met with anything other than calm and loving acceptance. Non-writers tend to jump straight to less, uh, supportive responses, i.e., “What, you love your computer more than you love me?” or “You’re never going to be able to publish that, you know,” or “I’m leaving you for the easy blond downstairs.”

2. When I get stuck in the Quagmire of Talentlessness, it’s nice to be able to shout, “Hey, honey, does this suck?” through the wall, and when I do so, I generally get an honest answer.

1. Kelly has never been within fifty miles of the Quagmire of Talentlessness. She couldn’t even get a visa to enter. She’d class the place up too much.

2. I don’t work more than Kelly, I’ve just mastered the art of sleeping with my eyes open in front of a computer screen. 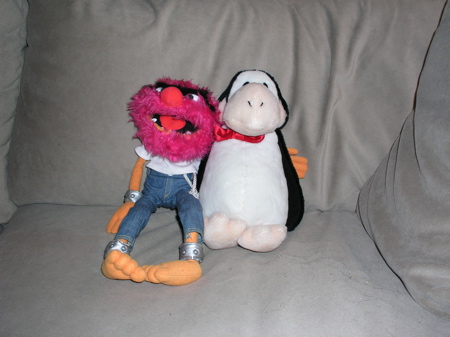 What’s the worst thing about having a writer for a partner?

Sometimes Kelly makes writing well look too simple. She read something to me the other day that she had just knocked out in an hour or so, and it was pretty much perfect. That was irritating and hurt my feelings.

Well, there’s the aforementioned work ethic thing, which is certainly annoying, but which probably has more benefits than drawbacks. I think the worst part is actually that we take turns being neurotic about the publishing business in particular (Bad reviews! No reviews! Unreturned phone calls!) and writing in general, and we have to be really careful to keep from feeding off each other in that regard. So far, we’ve been pretty lucky, and one of us is usually up enough to counter the one that’s down. Still, it’s a little dangerous.

Well, we both teach, but when we’re home at the same time, we’re either writing, napping, watching television, reading, or speculating about cats. It’s a simple existence.

Generally, I rise before dawn to practice tai chi in the solarium. I find that this leaves me centered and able to devote my full being to the real meat of the day: crossbow, quarterstaff, krav maga, and bull riding. I try to spend weekends working on my Sanskrit sonnet cycle, but I usually end up blowing at least one day in our underground bunker in Nevada. (I always swear I’m just dropping by to check on the superviruses, but damned if I don’t inevitably get sucked in.)

Or, wait you know, I do tend to get a little confused about this. Maybe my real life is the one that I
spend rubbing noses with my cats, obsessively checking my email, and very occasionally writing something. I’m not sure. I’ll have to get back to you. 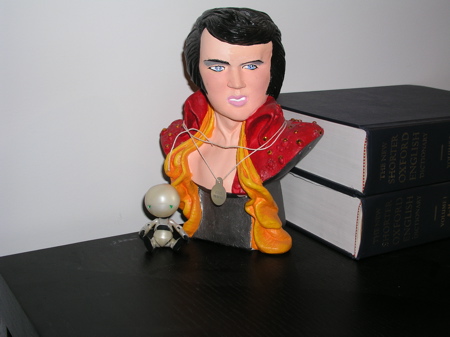 Would you like to see the workspace of a great writer? This is Owen’s. “My desk, with Marvin the Paranoid Android and the amazing Elvis bust that Scott Snyder painted for me.”

Her prose is so flexible and perfect. I know how hard she works, but the reader never feels it. Also, Kelly has an unfailing instinct for Elmore Leonard’s 10th rule of writing – she leaves out the parts that people skip.

My favorite thing about Owen’s writing is the very beginning, when he goes out for coffee and comes back saying, “I’ve got a great idea for a story. See, there’s this birthday party clown with Tourette’s, and he’s got a brother who’s a financial advisor, and they go deep-sea-fishing in the Mediterranean, surrounded by all of these urns of ancient olive oil ” I can’t even come close to approximating how wild and cool his ideas are, so I’m going to stop trying. But his finished work combines that wild, sparkling inspiration with true, heartfelt emotion that’s always right on key. 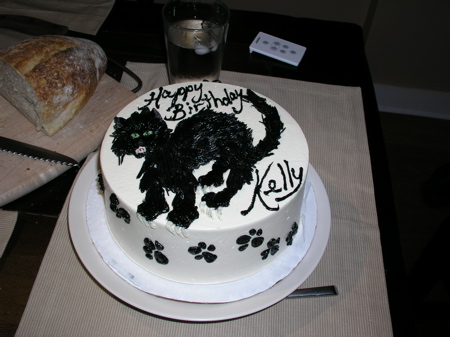 Speaking of birthdays, Owen says, “For Kelly’s birthday I asked the local bakery to make up a black cat cake (we have 2.5 black cats). My only specification was that the cat be fierce. This was the super cool result.”

When are you getting married?

IN UNISON: None of your business!

KELLY: You know, on the spirit plane, we’ve been married since Renaissance England. Which would make our next anniversary our 500th, which I believe is the Unicorn Horn anniversary. Good luck finding gifts that fit THAT bill.