Todd Zuniga is the editor of Opium magazine and host of one of the most popular reading series in NYC. 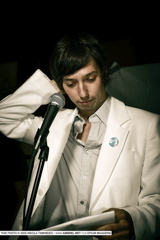 Tell me about the latest print edition of Opium and why my readers might want to buy it.

Opium’s print issues are spectacular in both design and content. I know I’m trumpeting my own wares here, but it’s not really my fault that they’re so good–it’s the writers, and the designer (David Barringer is outstanding, and a heck of a writer, to boot). 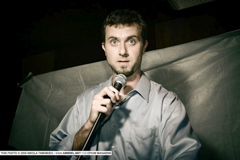 The newest collection opens with a story by Shya Scanlon that’ll melt part of your brain (in a good way), and there’s a story by Patrick Irelan which will have you perma-smiling the entire way through. But those are specific pieces; as a whole the theme of the issue was Fun & Games (though I hate theme issues, so we didn’t tell anyone), so the theme sort of rises out of really fantastic stories. Also, the Acknowledgments is done in the form of a Word Search. So, who knows, maybe your name is in there.

If readers of my blog order Opium.print via a link from my site, will you give them a discount?

Through the miracle of the internet, and some version of Opium’s burgeoning popularity, Opium’s .print2 has sold out! It’s around the country in many stores, but I, literally, have about 8 copies left for my personal collection. But, because you’ve asked, I’ve put a sale price up for .print1, which is fantastic, and should be bought by everyone with a skull. It’s 272 pages, and features 54 contributors. The best pound-for-pound collection you’ll find. You’re even in there, Sue, confirming it.

Tell me about the outrageously well-attended parties you’ve thrown for Opium. And what was Moby doing at the last one–is he a fan?

We’re very lucky to have gained such a loyal audience. It’s completely flattering and I’m honored every time someone steps through to door. The Opium readings are held monthly, on a Thursday night at Happy Ending in NYC–join the mailing list! (todd@opiummagazine). I’m a huge fan of throwing readings that feel more like parties with readings attached. That’s why there’s always a multimedia element: a slideshow, or a short film included in the festivities. But ultimately my goal is to get the smartest people I know in a room together, and introduce them to one another. It’s so fun. 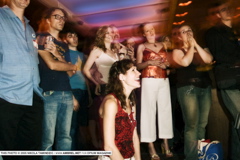 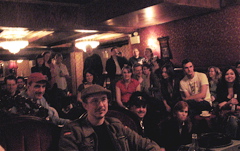 And because of our luck, and great attendance, Elizabeth Koch (Opium’s executive editor) is now hosting the Sweet Fancy Moses Literary Death Match (along with Dennis DiClaudio), which is the first or second Monday of each month. Details are here. The format includes three judges, four readers (each from different literary magazines) and a trophy and tiara for the winner. It’s hilarious, and unpredictable and Elizabeth is delightful as a host, since she always mis-speaks at least one of the readers names. As for Moby, he was a judge at the debut Death Match. He’s fantastic, and I think he carries a copy of Opium with him absolutely everywhere he goes. 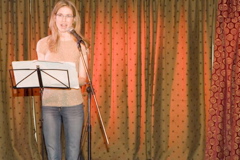 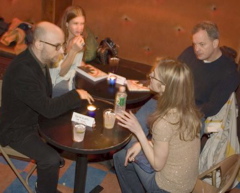 Give me some actual stats regarding your readings–attendance, give-aways, etc.

For our monthly readings, we get around 35-50 people, and everyone leaves with an Opium Magazine pin for the lapel of their choice. But for the launch parties, we’ve been very, very, very lucky: there were around 150 at the last one, and we hope to steroid up that number to 200 for the next one.

A couple of controversial questions, if you’re willing. Can you tell me what you know of the recent contest that was supposedly judged by JT LeRoy. And talk to me about Grand Theft Auto.

Truth is, I didn’t have much of a hand in it. I’m a PR Manager for Rockstar Games, but never dealt directly with the contest. But my roommate who sits next to me at the office, said he did speak to JT on the phone several times–I guess it’s no big deal now, since everyone knows, but he told me it was a woman. As for Grand Theft Auto, along with Winning Eleven 9 soccer and Ico, it’s the greatest video game ever made. That sentiment scored me this job, and I’ll think it long after I’m gone.

What does your girlfriend think of some of the outfits you wear, most specifically, the yellow sweater and the glitter belt?

I’ve had her answer this one. From the inimitable Elizabeth Koch: “I like his outfits, mostly because they fit me, and look better on me. I don’t know the yellow sweater. Do you mean his nerd green sweater? It smells like my grandmother’s attic. I like it very much. The glitter belt is obnoxious and cute, like Todd. So I like it, too.” 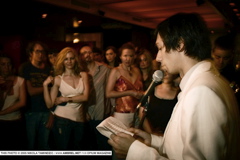 Okay, what are you able to give away about your big big news?

Okay, I’ll spill it, as we’re getting close to go-time. Oh, but first, there’s other big news: Opium’s going on a World Tour (led by Elizabeth and me)–starting on June 17th in Shanghai, China, with stops in Japan, Austria, Germany, France and concluding in London, England. I hope to meet every one of your readers along the way.

But that’s somehow small news, comparatively. What’s about to happen is I’m turning Opium into an entire network, or Den. We’ll be breaking up the site into smaller pieces (Opium Live is going to launch as its own, weekly podcast site, for instance), though OpiumMagazine.com will still continue to host daily stories and cartoons. I just realized I have to be more vague than I’d like to, because I want the launch of these things to be surprising and shocking and unlike anything the literary crowd has seen before.

Also, I acquired Sweet Fancy Moses, which is a really one of a kind journal, and that’ll be part of the network, and the expansion of all things literary and whimsical.

By August 19 (the Opium .print3 launch party), all will be revealed, but we’re going to reveal things along the way, as well.

Want to tell me (in roughly two sentences) about the book you’ve written?

It focuses on a guy who falls in love with a girl at first sight, just as she’s about to jump to her death. So it’s a love story. Typical fare.

Last question. Do you have an agent? And if an agent wanted to contact you, how can they reach you?

What a softball, you’re very sweet. There’s an agent that’s taken a liking to my novel, but at the first sign of interest I freaked, and have completely re-written it (cutting 92 pages in the process). My lovely belle has just read it, as she’s the fiercest editor I know, and that’s spurred another rewrite (ahh, the 9th draft). Anyway, in a month, it’ll be ready to go forward to agentsville. As for contacting me, I’m flattered by any attention: todd@opiummagazine.com.

Oh wait–that was not the last question. Tell me about the Opium fiction contest and what you’re looking for.

This is a very big deal for us, I’m glad you asked. The Opium Fiction Prize is worth $555 (to commemorate our 5 years online), and the deadline is May 8 (so very soon!). It’s being judged by Jonathan Baumbach who is so, so great. His resume as a writer and teacher could fill up a novella. There’s a $10 entry fee, which pays for the contest and directly supports the magazine.

As for what we’re looking for: a piece of fiction that knocks
our hair clean off with such force that it spins three times around, then lands back on our head crooked. In other words, something spectacular or heartbreaking or hilarious or unprecedented or surprising. But ideally, something that pulls off all five of those at once.

Here, I even made a logo: