I know most of us are used to writing for no pay so my ears always perk up when I hear of a chance for writers to actually make money. Here’s a little note from my pal and former co-worker, Tom Jackson: 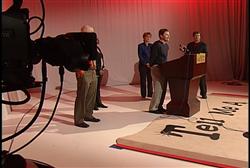 Attention flash-fiction writers: If you enjoy reading your stories aloud, you’ll LOVE “performing” them from memory before a live audience – especially if you could win $2,500 for it and be on TV. “Tell Me A Story,” a new reality/storytelling series – created by Popcorn Pictures and Peoria, Ill., PBS station WTVP – seeks auditioners May 27 to perform on episodes to be taped June 4. Click here for more info.

And now for some photos. Monday, I read with some great friends slash tremendous writers at The Back Room in NYC. It was like an old speakeasy with bookcases that were really doors and led to other rooms, and they served my scotch in a teacup. I don’t have pictures from that night. If you do, please email me any good ones.

But I do have photos (all taken by Mr. Henderson) from Roy Kesey’s reading the night before at KGB: 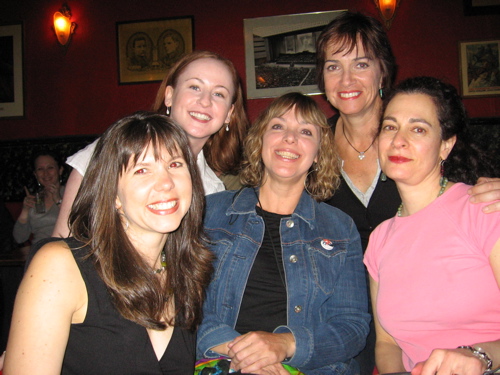 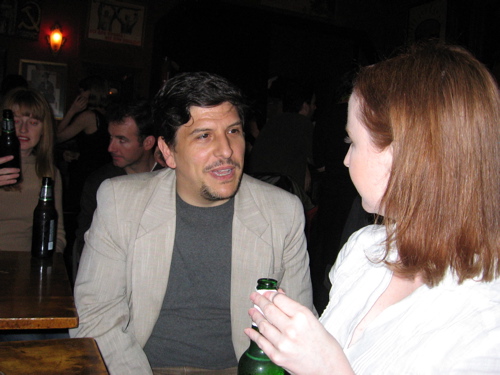 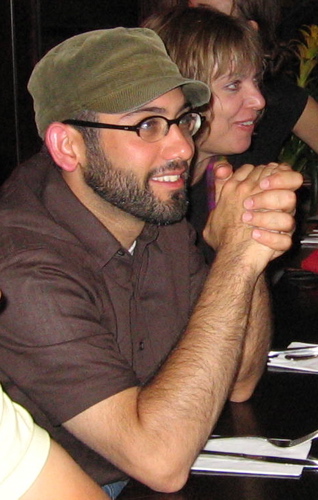 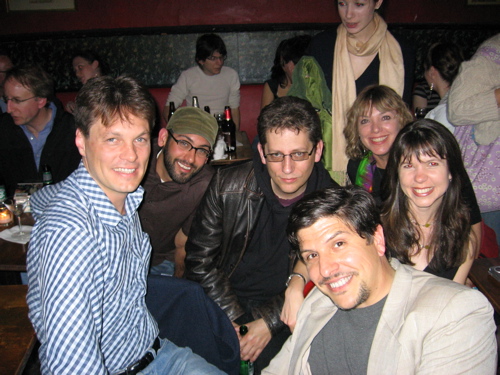 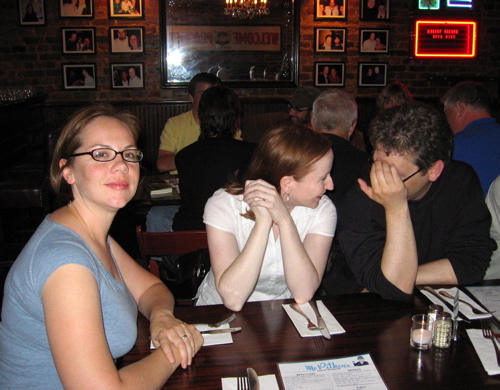 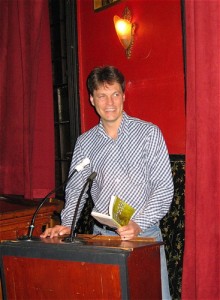 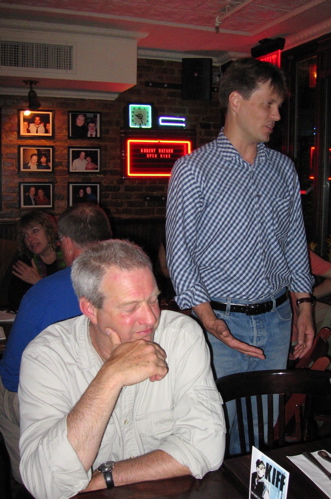 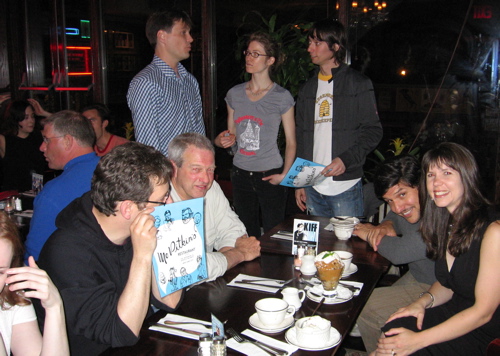 I asked my friend, Tom Jackson, to stop by and give his impressions of the Steelers draft picks. Those of you who know me well know I go through a pretty tough withdrawal between that last Steeler game and the first day of training camp. (Don’t make me drag out pictures of me super-pregnant at LaTrobe training camp or show the hospital sticker that won’t come off my Rod Woodson jersey to prove my obsession.) The weekend of the NFL draft, I’m a little peppier, my blood pumps a little stronger, and I shoot off happy emails to Tom, blasting the idiots who passed on Reggie Bush for a DE and giving kudos to the Saints and Titans for rebuilding their teams.

Okay, before I hand things over to Tom, let me just direct you to an interview I did yesterday. Fascinating questions from another writer and editor. If you’re interested in why I blog or what themes I tend to write about, please click here.

I know what you’re wondering. Did Sue, with her ever-expanding list of outstanding media connections, get that Tom Jackson to discuss her beloved Steelers’ ’06 draft class?

Since my friendship with Sue began over a chance discussion of the Steelers’ draft class that included Colorado State linebacker Joey Porter (“perfect for the 3-4 defense,” we concluded and we were right!), she asked me to bring our annual draft discussion to her blog. And, as usual, I’m providing my sometimes odd if often on-the-money take on this year’s Steeler picks.

First of all, I commend Coach Cowher and G.M. Kevin Colbert for keeping focus going into the draft. They seemed to base their picks on the Steelers’ 9-7 regular-season record a precipitous drop from the season before rather than their championship status. Distinct holes existed on their roster and they filled them, despite having that “champions’ disadvantage” of picking last each round.

The most glaring hole: Number two wide receiver. Not willing to sit tight with that last pick of the first round, Cowher and Colbert (I’ll just call them “Cowbert” from now on for brevity’s sake) traded up to 25 secure the top receiver in the draft: Ohio State’s Santonio Holmes. He’s a great route-runner, fast if not explosive, willing to get physical to make the catch basically the ideal traits of a second receiver in Pittsburgh. He’s about the same size as the man he’s replacing new Redskin Antwaan Randal-El and he can return kicks. As smart a first pick as you’d expect from the World Champs.

Cowbert also picked two quarterbacks: Alabama State’s Tarvaris Jackson in the second round and Bowling Green’s Omar Jacobs in the fifth. You football novices may be thinking: What the hell? Roethlisberger’s about to enter his third season of a Canton-bound career? But in the NFL, QBs are like starting pitchers in baseball you can never have enough. Big Ben has missed what could be considered significant time each of the last two years, so having able, athletic backups is vital. Both seem like “projects,” but even if just one of them clicks, both picks are justified.

[Another editor’s note: In case you don’t already know the famous Steelers fight-polka, please see handy play button at the end of today’s post . . . . You can even play it now, as you’re reading.]

With safety Chris Hope defecting to Tennessee, third-round pick Anthony Smith of Syracuse is another prudent choice. He’s been described as a “tough defender who loves the game,” though he’s smallish for a safety (six-foot, under 200 lbs hell, not a lot bigger than me) and not so much fast as quick. Again, Smith’s likely “Steeler mentality” and work ethic makes him a decent choice.

The other third-round pick, Florida State receiver Willie Reid, is about as big as Holmes (in other words, “not very”) but is fast. He’s projecting to be a kick returner, since he wasn’t a particularly productive receiver until his senior year. (Just watch he’ll go to training camp and steal the starting second-receiver slot from Holmes.)

The Steeler O-line continues to be one of the best. One way to maintain that is to add depth: Cowbert picked guard Willie Colon of Hofstra with one of two fourth-round picks and plucked California center Marvin Philip in the sixth. Colon, a projected sixth-rounder, appealed to Cowbert because of his sound blocking fundamentals. And how often do you get a chance to draft a wide-assed guy named Colon?

Philip, another hard-working toughy, was a mild surprise in the sixth round he was projected to go a round or two earlier. A heady but aggressive lineman, a good addition to the O-line’s depth.

Cowbert used their second fourth-round selection to take Miami (FL) DT Orien Harris, a projected sixth-rounder. A hard-working, team-oriented guy, Harris doesn’t have the bulk (read: huge ass) to be a true nose tackle in a 3-4. He won’t be the star, but he’ll do some damage if his linemates draw double-teams.

Charles Davis, the second of two fifth-round picks, is a big tight end (really, is there any other kind?) from Purdue. He’s a good pass catcher, a likely third-down or red-zone specialist, who could stand to improve his blocking. But, like all Steeler picks, he seems willing to work hard which should make up for the fact he was projected to be an undrafted free agent signee.

The Steelers’ last pick of the draft Virginia Tech RB Cedric Humes is pretty much what you’d expect from a seventh-rounder. Neither particularly fast nor creative, he was only a part-time starter, and his straight-forward style projects to his being a short-yardage back. Not exactly the ideal replacement for The Bus, but, hey, remember: seventh round.

Why didn’t they
pick LenDale White, the outstanding backup to Reggie Bush with USC and all-time touchdown king for the Trojans? Good question. Talk about an ideal replacement for The Bus.

Then again, if you already have a good, young starting running back, you don’t take another one in the first round. Unless, of course, it’s Reggie Bush. (Yeah, Houston Texans, we’re talking about you.)

Thank the Lord and Saints Patrick and Albert the Great
that Cowbert had the wisdom to forego Miami WR Sinorice Moss with their first pick. Moss, the brother of Redskins’ receiver Santana, is speedy-quick (sub-4.4 40) and has, of course, the pedigree. And that name: With “Rice” and “Moss” in your moniker, how can you NOT be an eventual Pro Bowler. But at a minuscule 5-foot-8, he’s at least a dotted, lower-case “i” smaller than Night Train co-founder (and Patriots fan) Rod Siino. Plus, he’s never been near the stud that any of his namesakes were in college, including his brother. Several mock drafts predicted Moss going to the Steelers in the first round, but he stuck around until the mid-second, when the Giants nabbed him. He was the fourth receiver picked on the day.