Where do you create your art, write your stories, compose your music? Describe that space to me and how you inhabit it.

On Wednesday, Roy Kesey will tackle this question with the help of his five-year-old daughter, who will also share some opinions about her father’s newly-published novella.

What is a novella, you ask?

Officially, a novella is longer than a short story and shorter than a novel, and yet perfectly complete. The best novellas are not remembered for their quirky length but for the power of the characters and the journey they take. Think Joseph Conrad’s HEART OF DARKNESS, Ernest Hemingway’s THE OLD MAN AND THE SEA, Nathaniel West’s THE DAY OF THE LOCUST, Chinua Achebe’s THINGS FALL APART. And now add Roy Kesey’s NOTHING IN THE WORLD to this list. 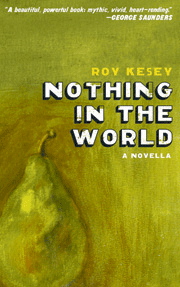 “A beautiful, powerful book: mythic, vivid, heart-rending. Kesey reminds us anew of how much power there is in an open heart and the simple declarative sentence. He also reminds us that war is a viral madness, infecting everyone it touches.”

NOTHING IN THE WORLD is the story of Josko, a Croatian teenager, called to war against the Serbians. Josko is hardly concerned about the issues that have led to this war. He notices a vague bitterness his parents and others in his village feel toward the Serbians, but Josko is more concerned with girls, comics and spearfishing.

When he puts on his uniform, he finds himself in a disorganized battle – and unclear of his mission or even who is the enemy – he fights out of an instinct to survive. The next moment, he is declared a hero, and soon after that, he is the only surviving member of his army, wandering the country with shrapnel in his head.

In this novella, there is a thin line between hero, survivalist, escapee, villain and madman. As Josko tries to find home, it is clear that the devastation from the war is shared by both sides. One destroyed village, with its grieving and angry villagers, is just like another ”“ and only the accents and uniforms give away which side is which.

Oddly enough, NOTHING IN THE WORLD is also a story of the enduring spirit of mankind – how very difficult it is to extinguish all hope or love, and how something as simple as an over-ripe pear, an open view to the stars, or the memory of someone you love can mean a great deal more than the wreck around you.

NOTHING IN THE WORLD is a small and brilliant little book. You can read it in one day but it won’t leave you in a hurry.

Thanks for stopping by and see you Wednesday!