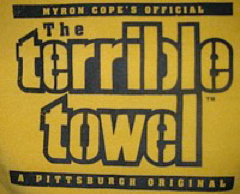 Isn’t the whole Kesey family wonderful? They’ve been very good to our family and we still owe them a favor for letting us crash at their place in Beijing for 2 weeks. 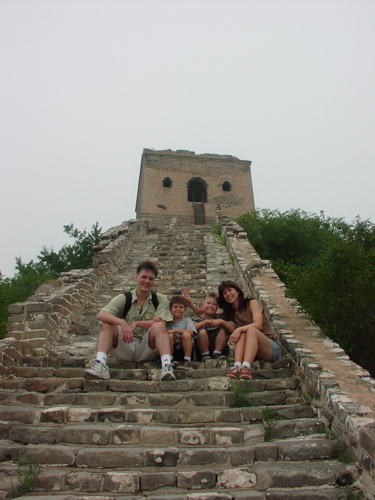 Let me just plug his book one more time: NOTHING IN THE WORLD. It’s an eight-dollar paperback, so it costs less than, say, a chocolate Ã©clair binge. But with Kesey’s book, you’ll feel more satisfied in the morning.

I want to thank all of you who have been reading and responding to my blog. If you’ve wanted to post a comment but felt too shy, just give it a try. I like to know who’s here, and I’ll always respond.

It was great to hear about where you write and how loud or quiet you like your space. Remember Greg talking about all the posters near his computer? 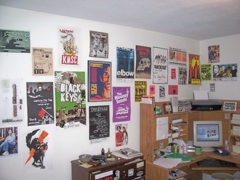 I have so much admiration and curiosity about you organized-types with your color-coded notebooks. Wouldn’t life be nice if I were like that, too? Alas, I am not an organized soul.

I trim or tuck a branch until it grows in the shape I want. All day, birds and squirrels sit on it, and ants chew at the new leaves. 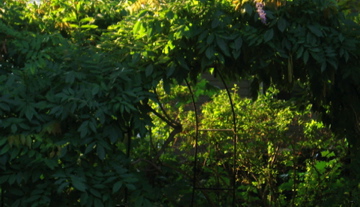 But back to my “office.”

My space is disastrous, including the floor around it. As I write, I ball up pieces of paper and drop them on the floor. If I’m on a real writing binge, I’ll be ankle-deep in papers. The desk is littered with small torn off pieces of notebook paper, receipts and envelopes ”“ each with 3 or 4 very important words on them.

What else is on my desk? Let me dig around and see: Sunglasses, bright pink felt-tip pens, a post card from Pasha, another from my friend Stephanie (an oceanographer and physicist ”“ we’ve been friends since first grade), a cell phone no one has the number to, two cups of cold coffee, a Glade plug-in that’s not plugged in, and a packet from the Board of Elections (because I’m the Democratic Chairperson for the Primary in my district next Tuesday). 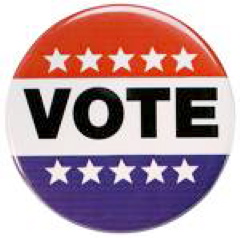 (don’t forget, all my American friends who are not felons–Tuesday = Primary)

(Regular readers know I fired someone’s ass from my team last year. As Chairperson, you can do that. And you should when the people there to help voters shout out racial and homophobic slurs like they’ve got Tourette’s.)

I sit here at my desk a lot but I don’t get much done because I’m very distractible. I like to poke around on the internet and read my mail and download music. I’m playing music right now, but we’ll talk about music on another day. That’s a promise.

I work in spurts. I start an interview, I start a book review, I have an idea for a new story, I have a finished story to hand Brad Listi but no photos to go with it, I have a list of photos I want to take. All of these things are written on the various torn pieces of paper, and sometimes the papers disappear under my computer.

I get most of my ideas in the car, and I often write while I drive ”“ again, on whatever slip of paper I can find, and I use the steering wheel so the pen won’t rip the paper. It’s funny, later, when you look at the words and half-sentences you’re willing to crash the car in order to capture: tattooed artificial leg. she should only shoplift beauty products. eats frozen guacamole with her hair barrette. what shampoo does Neil Gaiman use ”“ should ask him. 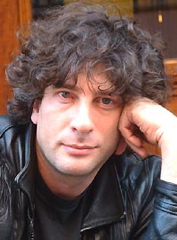 (Neil Gaiman–thanks for the photo, Robin)

Here’s what I like about reading your answers: I can picture you all a little more clearly. And when I read your stories and books, I’ll see something of the writer behind the scenes: Greg under the concert posters, Lance in his lair with Reese’s peanut butter cups, Frank typing away until some Balkan history comes along and distracts him, Aurelio in the guest house during the morning shift, Norman with a clipboard and a pencil, Stephanie taking a break with a good book, Joe trying to write anywhere at all ”“ and fast ”“ because someone’s on her way and knows how to get his attention, Robin surrounded by a hundred guitars, Gail in a quiet room with a giant dog, Maria at MacDowell and missing her heated floors and cherry blossom pink walls, Terry noticing absolutely everything around him that others might overlook, Patry filled with music and ideas, Peter surrounded by English gardens, and Noria in a room of oversaturated colors and Barnum’s odd ones.

For those of you who like to picture where people are when they’re not with you ”“ every Friday night, the Hendersons are at Chinese school. Some nights I do hall duty and tell kids, “Boo yow pow” if they’re running. (Not much I can do about all those kids skating on their heelies. I don’t know enough Chinese to say, “Knock it off.”)

Please tune in tomorrow for the debut of Frank Daniels’ Lit Riot. I invited Frank to stop by once a month because his bold, unfiltered style gives me goosebumps. Saturday, he promises to deliver a blistering diatribe about the publishing industry. What do I say about that? Bless him.