When writing non-fiction and memoir, do you worry about how you portray real people in your life? What have you risked to tell your truths? Or, if you’re someone who has protected others from the truths you know, what have you given up by remaining silent?

(Don’t think you have to be a writer to answer this question. Answer however it applies to your art.)

Author and journalist, Amy Wilentz, tells uncomfortable truths, and Wednesday, she’ll talk about the consequences of this.

Amy is the author (or translator) of these books: 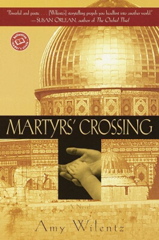 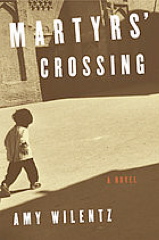 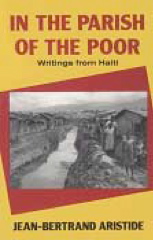 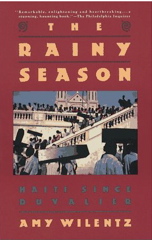 Her latest book, however, is of a much more personal nature. In I FEEL EARTHQUAKES MORE OFTEN THAN THEY HAPPEN: COMING TO CALIFORNIA IN THE AGE OF SCHWARZENEGGER (Simon & Schuster, 2006), she writes of her fear of catastrophe following 9-11 and her desire to flee the east coast to what she believed would be a safer place. What she discovers about fear ”“ her own as well as the country’s fear and how that impacts the political scene – drives the narrative of this book. 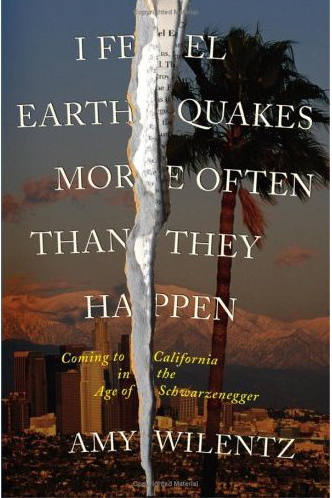 I looked around New York and the whole place reeked of the aftermath of September 11; there were checkpoints at the subway stops, armed guards at entrances to bridges, and something called “police actions” that occasionally stopped all traffic in both directions (p. 23).

Once in California, however, there were new catastrophes to fear.

At my sons’ new elementary school in a church in Hollywood, I was encouraged to supply what are called “comfort bags” for them. I was given a flyer that told me what to include in the bags marked with their names: a favorite stuffed animal or security object, a book, games, a change of clothes, a toothbrush, and perhaps a photograph of the family (which sounded ominous). This was in case of earthquake (p. 25).

What happens when you combine this culture of fear and uncertainty with a hyper-masculine Hollywood star, “who never question[s] himself” (p. 232)?

In shaky times, a politician who projects power, decisiveness, and a measure of violence can win big with the American people. President Bush was such a figure for a time. When an old friend of his disagreed publicly with Schwarzenegger about not returning $2 billion he had borrowed from the education pot and about changing the rules of teacher tenure, the governor called his friend up on the phone and told him that his position was “pussy” (p. 138-9).

As a friend of mine said to me over dinner one night, “I’m a Democrat but I like Bush because he’s decisive. Clinton always wanted to think about every issue from every angle. I can’t stand that, all the doubt and worry, that constant questioning. I want a decision maker.” It’s the same principle that caused Californians to vote for Schwarzenegger, the same thing that made me hope he was a rescuer, the same principle that makes the creationists want to fit the tar pits into a prearranged scheme. People feel comfortable with certainty (p. 184).

The socio-political analysis is not without some risky truth-telling, and much of it concerns celebrities such as Warren Beatty (who graduated from my high school), Carrie Fisher, Joan Didion, Arianna Huffington, and Steve Wasserman.

Amy on Huffington as celebrity:

There are degrees, wattages, of celebrity. Arnold’s is a klieg light; Arianna’s an appliance bulb (p. 101).

On her way from her hybrid Toyota to the makeshift podium, Huffington handed off her grande Starbucks latte cup to an aide, to keep it off camera. To one sector of the California electorate, Starbucks smacks of pretension and privilege; to another, it represents corporatism and globalization; you just can’t win with that cup in your hand. In midwalk, another aide handed her a small bottle of water, instead (p. 102).

Following a lethal blow to Huffington’s campaign, here is a description of a barbecue thrown at her home:

But no, there is no outdoor fire. (The fire is in the kitchen, where the housekeeper is laboring.) Many skinny wives in tight jeans, their blouses diaphanous in the setting sun, come through the big doors of the Huffington breezeway out into the long gardens near the pool, bearing baked desserts which they did not bake and will not eat (p. 103).

What was most eye-opening for me was seeing the deep fears of these unsettling times side-by-side with the absurd, Hollywood-type paradise so many seek.

I wonder: how it can be that when my friend emerges from her yoga class zonked out and blessed out, floating down the pretty little street on brown moccasins to meet me at Peets, and Sir Bernard is playing on his metal drum while girls in Sunday trousers and babies in strollers glide by, I wonder how can it be that at almost the very same moment when my friend sits down and smiles, and I bring her a double tall percent latte, and a baby in pink who’s passing by pats a dog lying under a table outside the door, how can it be that in Iraq, a suicide bomber is busy blowing hundreds of people up into ashes (p. 295-6)?

Stop back on Wednesday to visit with Amy and join the discussion. Have a good day!