Danny Gregory can convince anyone that they can draw, that they have time to draw, and that they can silence their inner critic by drawing often and drawing in pen. There’s something wonderfully un-labored about his drawing, that’s what I like best, that you can see enjoyment in the strokes. Maybe you’ll see what I mean in today’s interview and also if you check out his books, Everyday Matters and The Creative License: Giving Yourself Permission to Be the Artist You Truly Are. 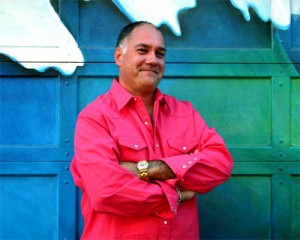 Tell me your story of becoming an artist.

I had loved to draw and paint when I was small but by the time I graduated from high school, art had seemed like an impractical and limiting way to spend my time (ah, the arrogance of youth). By the time I was in my mid twenties, I had stopped making any sort of art. When I was in my mid 30s, my wife was run over by a subway train and left a paraplegic. I was left with a profound sense of pointlessness and loss. After floundering around in all sorts of direction for some sort of meaning and purpose, I started to draw one day. It quickly built into an obsession as I recorded every aspect of my everyday life. A few years later, I had a few books published and, more at the prompting of others than anything I perceived, I started to think that maybe I was an artist. 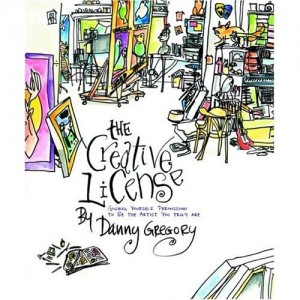 What can drawing do for a person with no real skill for it?

First off, the only way any one gets skill at drawing (or any other sort of worthwhile pursuit) is by practicing. Within a few weeks, any one will see a dramatic increase in the accuracy and fluency of their drawing. It’s a lot easier than golf, French or Grand Theft Auto.

I have heard from several thousand people who have started to draw, and they are universally enthusiastic. Drawing gives them a sense of accomplishment, of appreciation of their world, of tranquility. It means never being bored in an airport again. It can be a solitary or a communal pursuit and no matter how good one gets at it there are always new things to learn and try. 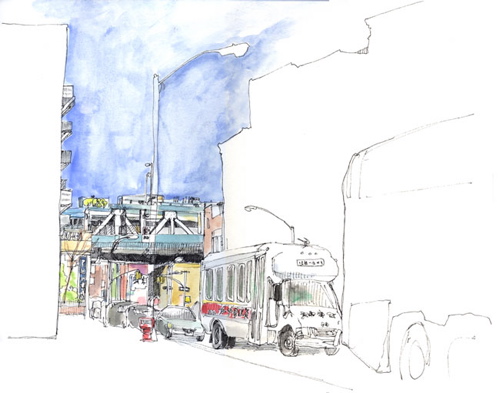 Is there anything in particular (object, emotion, theme) that you draw over and over?

I draw a lot of buildings as I live in a big city. I draw my dogs, cups of tea, people relaxing, products and packages, meals as I eat them….

Anything you can’t seem to capture?

If something is reasonably still, I’ll draw it. There’s no real difference in what a thing is to me. If it’s complicated and irregular it’s generally more interesting but everything I see is made up of colors and shadows, lines and forms. It’s pretty simple. Oh, wait, there is one subject that I find tough: drawing musicians while they play. For some reason my mind finds it hard to listen to live music and draw at the same time. 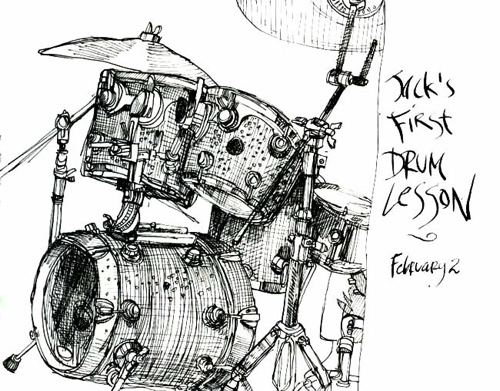 Has your art changed since you became a father? Have your goals in life changed?

Well, I started making art after I became a father but my son has a lot of influence on me. He is a very fluid and confident artist and draws all the time. We share our work and talk about what we are doing. It’s great to have a fellow spirit right in my own home.

You have a very generous nature. Where does that come from?

Huh, I guess I don’t really think of myself that way. I assume I’m sort of a crab and I come from a family of basically misanthropic people. I think my wife has had a lot of influence on me and being a dad and someone who lives with a disabled person have made me a little less self-involved. I have started to wonder, however, if my drive to encourage others to draw isn’t more of an ego thing, a desire to control others, than generosity. I don’t know. I’m rethinking my perspective on many things these days and wrestling with the right path. 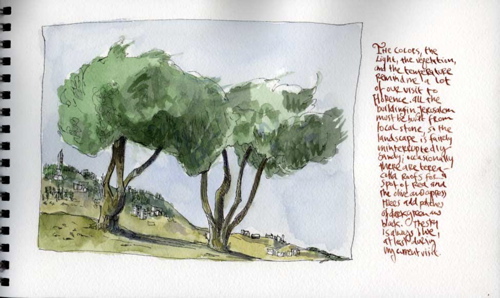 Tell me about the Everyday Matters group.

I started blogging at the end of 2003. As my site gathered momentum, there seemed to be a lot of discourse among the readers on the comments section of my posts and I was functioning as moderator. I thought it might be nice if all these people, who were speaking so separately about similar things, could all get into the same room and so I set up a Yahoo group. We now have almost 2000 members from all over the world and they have sustained a vibrant, stimulating conversation ever since. The group also meets off line in so-called Sketchcrawls, the drawing equivalent of a pub crawl. We get together in various places and do a series of short drawings in one location after another and then have coffee or lunch together and share our work and our thoughts. There are new people joining every day, some are complete novices who have never drawn, others are professional illustrators and teachers. We have developed a wiki to share information on supplies, books, etc. One of the members began offering a weekly subject for drawing and many of the members have started their own blogs to share the work they do. It’s a wonderful community. 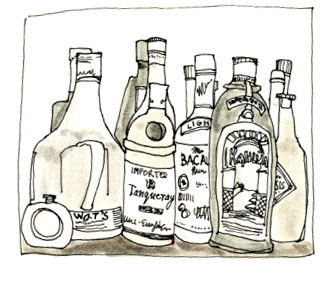 It’s generally some sort of universal topic like draw your dog, draw an important door in your life, draw something that feels refreshing, etc. Ideally people will write a little something along with their drawing. The idea is to give people simple accessible subjects that feel personal to them. Then they share them on their blogs and on Flickr and we all give them comments and encouragement. 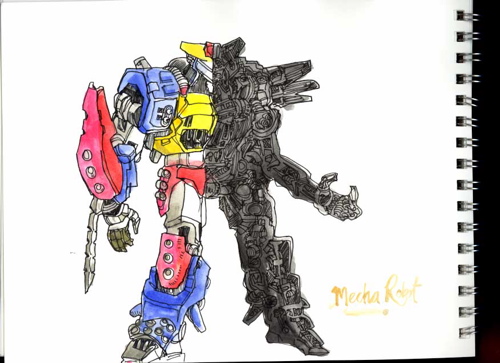 You and my regular guest, Pasha Malla, both work for The Morning News. Want to tell my readers about TMN and what you do for them?

I am a contributing artist for TMN. It’s a website that has been around for quite awhile and has hundreds of thousands of readers. Each day, a new article, generally something topical or funny or personal is posted along with a review of interesting news-stories, some major, some bizarre, all interesting. I illustrate some articles, write and draw others, and created many of the bits of art that were part of the design. The site just underwent a facelift and it’s less visually oriented and slicker so my work is less prominent. 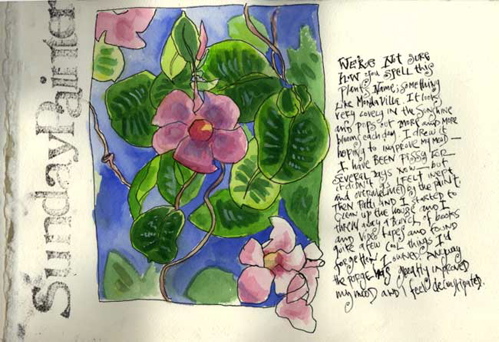 My youngest son is a marvelous little creator and sometimes talks about becoming a cartoonist or illustrator when he grows up. But much of his drawing is spent crumpling and ripping papers and becoming furious at himself or his drawing. What advice do you have for a little boy with a love-hate relationship with drawing?

The key is to keep art as a part of his life, like playing, building, running, etc. And look at yourself as an example: Do you draw? Do you beat yourself up about your own creativity? Do you sing with him, draw with him, etc? If he feels that creativity is just a part of life, like eating and breathing, he’ll be less judgmental. Also, moderate your encouragement. I find that if I give my own son too much praise and we make too much of a fuss about his drawings it can turn into a sort of pressure to perform that makes him too hard on himself. It’s as if positive judgment can feel as heavy as negative judgment. 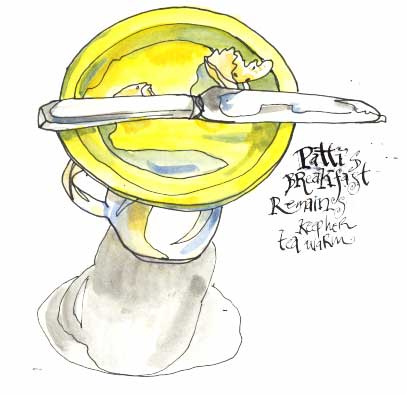 Tell me three people who inspire you.

Vincent Van Gogh inspires me because the art he made in the last three years of his life was so amazing. His career is an amazing case study in what a self-taught, dedicated person can accomplish. At first, his stuff was terrible, murky, lopsided, ham fisted. Then he went to Paris and in a few months, he took off. He had so little positive feedback and yet he persevered. I tell myself that if he could do it, I could. After I’m only slightly insane.

I also admire Ronald Searle‘s work a lot. He was a great recorder of the sorts of things I like to draw and he combined careful observation with a looseness and a personal drawing line that I aspire to with each drawing.

I admire my friend d.price a great deal. He is also self-taught and a great observer of the simple pleasures in life. He showed me a great deal about how many forms and topics once can express with an illustrated journal. Whenever we speak, I feel refreshed, renewed and inspired. Our lives are a different as can be and yet, we are similar spirits. 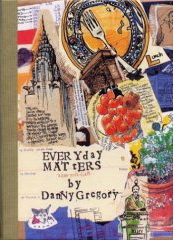 What are you working on these days?

I am taking a major break from doing art for anyone but me. For the past few years I have been pulled between my books, my blog, my readers’ community, teaching, etc., and I desperately want to reconnect with my original impulse to draw. This summer, I decided to step back from all external demands and just get back to my little drawing books. I am open to the possibility that a new idea or adventure will come a long but feel no pressure to look for it.

If you’re on MySpace, you can “friend” Danny and say hello by clicking right here.