Marcy Dermansky‘s novel TWINS is filled with secrets – maybe the kind you remember keeping when you were in high school. 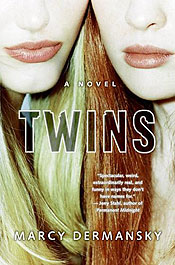 Identical twins Sue and Chloe, both feel the pain of being a teenager in a home where parents are too busy to provide comfort. But one’s emotional survival depends on clinging to the safety that twinship brings, while the other wants desperately to break away and be known on her own terms.

As the reader travels through alternating chapters from each twin’s perspective, you’ll remember the dark struggles of being a teenager: friends you can’t trust, drastic haircuts, the permanence of tattoos, sex before you’re ready, no sex when you are ready, and all the crazy games you played with food. 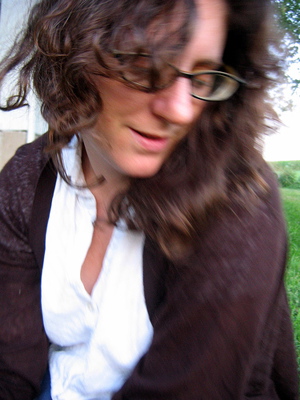 I’ve decided to bring you close to the secrets girls carry by inviting you to a slumber party where Marcy and I discuss our high school years and the struggles we shared with the characters from TWINS.

When you looked in the mirror, what did you see? What did you focus on? 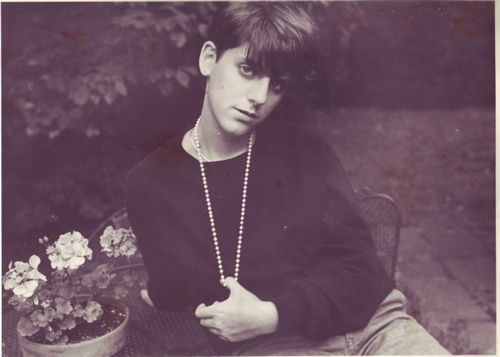 I was fifteen when this picture was taken. I’d done a Felicity, long before there was Felicity, gotten my hair chopped off at the Astor Place barbershop. It seems, now, like such a brave, bold haircut. I look at that picture and can’t believe how hard I was trying: the eyeliner, pearl necklace, gold chain. Sort of floors me. I would want to know that girl. 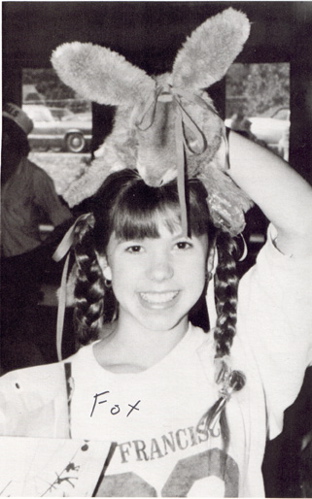 Me on Spirit Day

I love the mix of Goth eyeliner and pearls! I would have wanted to know that girl, too. I pretended to be someone who didn’t care about mirrors, but in private, I was always studying myself. When I looked in the mirror, I saw a kid who looked younger than everyone else. I desperately wanted to look pretty or cool or mysterious. The one thing I didn’t want to look like was cute.

Tell me about slumber parties you attended as a kid.

I never went to one of those super big parties with twelve girls in sleeping bags, like a scene from the Brady Bunch. Did you? I went to see ET with my mother and my sister when I was in the eighth grade and found all of the popular girls and boys and my not so popular best friend three rows ahead of us. And I cried, before the movie and then during the movie, which was so good I came out of my self-pity.

I did have regular sleepovers. Sondra and Jenny from the neighborhood, they used to sleep over all the time–despite the fact that Jenny was somehow afraid of my cat Barry. Not the dog, just the cat. I never understood, though Barry the cat did use to prowl the halls in the middle of the night and sometimes pounce on things.

We used to make Toll House chocolate chip cookies and watch the Love Boat and then Fantasy Island. Fantasy Island was very scary. I would also blush and hide my face behind my hands during the kissing scenes in The Love Boat. 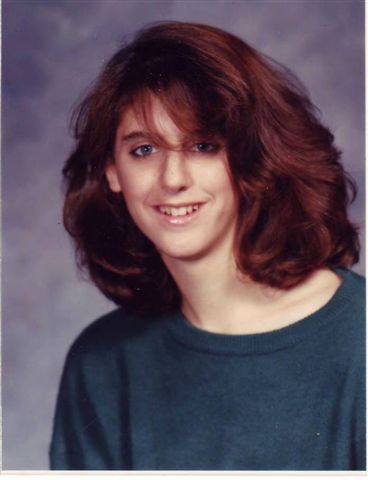 Marcy, the way she’d look in your wallet

All the slumber parties I went to were kind of frightening because girls turn on each other in the dark and you never know which side you’ll be on. This was how it was in junior high, anyway. After that, either slumber parties went out of fashion or I simply wasn’t invited. We used to play Levitation (“Agony, agony, let’s lift her up to heaven!”) and fought over a handful of boys we all loved. If you fell asleep first, you’d get your eyebrows Nair’ed, or worse. Still, you wanted to be invited. You know how it is?

I thought you nailed that in TWINS, the kind of fear girls often have of even their closest friends –that they’ll turn on you or that they’re not to be trusted. I would have liked to have had two good friends to watch Love Boat with, but I was always in a large group and real close to the bottom of the pecking order.

Girls are notoriously strange eaters – choosing a single food to eat, binging and purging, bragging about diets. What kind of eater were you?

In high school, I was the Snickers eating, diet girl type, always jealous of the ones with the real eating disorders because I never had the will power to throw up or starve myself. 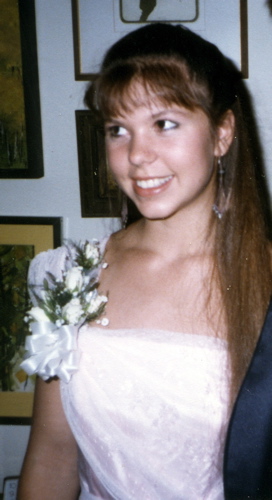 Me about to be very disappointed with my homecoming date

Oh me, too! I used to watch those after school specials on anorexia, hoping to pick up some good diet tips, but I never had the will power to follow through long enough to turn into Twiggy. Most girls I knew felt the same, we all wanted anorexia as our base so we could then eat what we wanted to.

Seriously, though, I had a good friend who was hospitalized most of our senior year for anorexia. She got very hairy on her arms and face, and you could smell her organs rotting. I can’t describe the smell but I remember it so well, and how she would brag about all the pounds of coins in her purse ”“ it was lunch money her parents had given her and she’d never spent any of it.

Can you talk about the characters in TWINS and the various issues they have with food? I’m also curious whether you think their issues were typical or atypical of what went on in your own high school.

Early in TWINS, Sue is pretty disdainful of girls who diet. Eventually, Chloe and Sue end up throwing up their pizza together in the bathroom in the middle of the night. A genuine lesson in bulimia. Sad to say, I think Chloe and Sue’s issues with food are pretty typical of teenagers. Most teenage girls (and women) in this country are pretty messed up about their body image. I actually came into contact with more serious eating disorders in college than high school. That awful story of your friend in high school who was eventually hospitalized reminds me of Smita’s story. Smita delivers a super serious monologue (it was hard to write, so important to do well) in TWINS about how anorexia almost killed her.

Tell me about some of your best friends around junior high and high school.

I’ve been thinking about this, and I didn’t have best friends in junior high or high school. Friends, yes, but never anything close to the intensity of the Chloe and Sue bond in TWINS. I also might have seemed like a bit of an oddball, riding my unicycle to tennis practice after school and going home for lunch. I used to hang out with my English teachers. They gave me books to read. 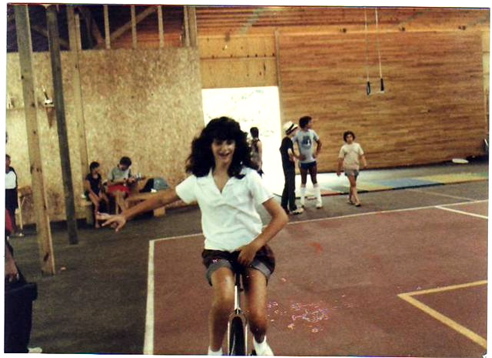 Marcy on her unicycle!

I was terrified of girls in junior high. Less so, in high school, but I never really opened up to any, even those I considered my closest friends. My best friend in high school, the one I told all my secrets to, was the janitor. We hung out after school and always danced with each other when there was a school dance.

I immediately want to know more about your friendship with the janitor. Unlikely friendships are always interesting, the stuff of good indie movies.

Sadly, as is the way with girls who befriend 40-ish-year-old janitors, no one takes your picture together. Here’s the only photo I could find in my yearbook. He’s all the way on the right. A sweetheart, and we gossiped and wrote poetry and listened to opera on a little tape cassette after school. I adored him. 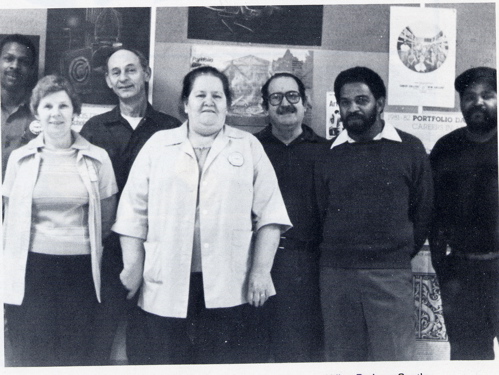 You know what always strikes me – no matter who you talk to and what a person dressed like in junior high and high school, you hear this overwhelming sense of people feeling lonely and on the outside. I’m curious about this, both with you and the characters in TWINS. And what seemed to soothe the loneliness – music, drugs, rocking in a corner?

Loneliness. I think that when it comes down to it, a fair amount of the popular people are trapped in their own private lonely worlds but have shinier public shells. I did my share of rocking in a corner in high school, but mainly, I was waiting. I knew there would be college, a new start, and I accepted my teenage unhappiness as fact. I couldn’t, for instance, turn those years into a memoir. They were in no way extraordinary.

What I love about writing is that I can have my characters act out in ways I might have liked to, but didn’t necessarily have the nerve for. I have never been to Hawaii; instead I sent Chloe to swim with the sea turtles. Sue mistreats her dog. She runs away from home, she takes a variety of narcotics, she steals her sister’s best friend and then cruelly plays with her heart. Interesting experiences often stem from pain, loneliness, obsession. 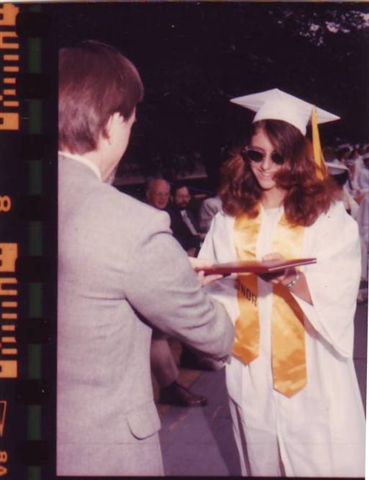 What gave you joy back then? What was the thing you held to that got you through?

My answer goes back around to the question about loneliness, what soothes you. You were right about music. I hid in my room and blasted the Smiths and U2, Prince and Joni Mitchell. And books. Books and music and chocolate, sometimes all at once. I’m embarrassed how cliched this sounds. I was definitely smitten with a certain kind of book, romanticized depressed women in fiction: suicidal Slyvia Plath and The Bell Jar, the beautiful but incurably crazy Nicole Diver from Tender is the Night. It always felt good to get lost in a fictional world – and then to read the same book over and over again. Of course, I still do that. When I look back at my old books, the pages are sticky, smeared with chocolate. 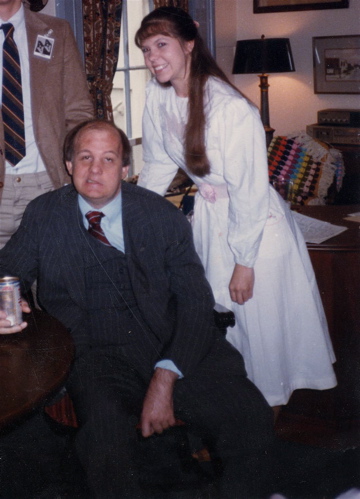 Me doing my first interview (but Marcy’s cooler!)

Books. Me, too! That’s where I felt I’d met people who understood me. I could go to a party and drink wine coolers and all of that, but mostly I found it boring. I’d stand along the edges feeling different. Books gave me the highest of highs. It’s not just the joy in finding people who are at a bit of a tilt, but realizing you prefer people like that and aren’t afraid to be one of them.

Want to be Marcy’s friend on MySpace? Just click here. 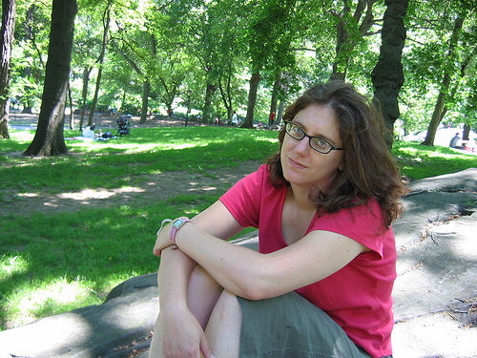