The setting that keeps cropping up in my writing is the town where my dad grew up and where my grandparents lived. I’ll just say it’s in the Northwest, and this is where I learned my fear of rattlesnakes. That’s me with my brother and grandparents up above. Here’s a funny thing. I tried Googling the town for a better photo and this is actually the photo that turned up on a real estate page:

I guess the town is what it is – big and flat and brown.

This is my grandparents’ house: I’m pretty sure that’s my dad in the photo. According to the stories I write, I’m very taken with this particular door. I don’t remember there being a tree. Anywhere. But there are two in this photo. Of course there’s a downtown: The unusual amount of traffic is because the photo was taken during a wedding at the courthouse.

Now, imagine you’re a colorful little girl and like to wear bows and cut your own hair; and you don’t especially like exerting energy except to chatter about books. And the big activity when you visit the grandparents is to go to the family cemetery to clear the brush and rattlesnakes out of it. We always took rifles with us. I hope we were also armed with tetanus shots because many of the grave markings are made of rusted metal. Besides snakes, the cemetery is full of stillborn children. One stranger was struck by lightning and buried there. There is a hotel in town. Last I heard, there was still a community toilet, sink and shower. No TVs in the rooms. The reason there’s even a hotel in a town this size is because there’s good hunting in the area. Recently, my dad had his high school reunion, but because 11 had rsvp’ed, they had to move the reunion to a larger, neighboring town. The reunion featured such activities as chokecherry picking and a ride past hay bale sculptures. My dad was the only one no longer living in the state, not to mention the only one with a Ph.D. This place has never captured me because of love. It was a place where a girl who likes to go off in her head can suddenly find herself in the middle of danger. It’s a place where you better get things right the first time. It’s a place where the wind and the gumbo and the pure nothingness of it will humble you. Until I married, it was the place I feared I’d be buried. As for the favorite Beatle poll, the official count was 8 for John, 6 for Paul, 3 for George, and 2 for Ringo. And then there was one George-John toss-up and two who loved Paul in childhood and switched to John as adults. Thanks to everyone who played!

Couple things before I go. Congratulations to Bach-Boy Henderson for landing the role of Harold Hill in his school production of The Music Man!

And here is a photo from the KGB website. That’s me, Carrie Kania and Josh Kilmer Purcell, dressed in our autumn palette. It was a great evening and I’ll have more to say about the reading soon. 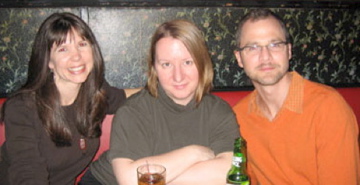 Stop by tomorrow for the monthly lit riot!