As you’re reading this, I’m locked in a hotel room, and I’m not coming out until my novel’s done.

Your answers to the question of the week are so heartstopping-beautiful, I hope you’ll go back to Monday’s Question of the Week and read every last one. Thank you to all of you who played or who considered playing. And thank you to Eric Spitznagel for giving me the idea for the question. 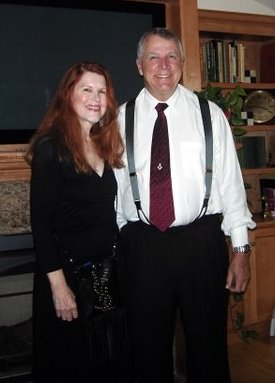 My mom and her twin brother – off to their 50th high school reunion.

In the closet of my childhood room, there’s a box containing everything I ever wrote from Kindergarten through high school. Year after year, I wrote in various school reports that I wanted to be a writer when I grew up. I drew typewriters. I did extra credit poetry units on death. I wrote bad sonnets about boys I no longer know.

Somehow it didn’t seem strange to me when I interviewed at Carnegie Mellon for their biomedical engineering program. The panic came when – 3 weeks into college – I realized I wanted to change majors. I crept slowly toward my creative writing degree, going first through the biology and psychology departments. I worried my parents would be disappointed and shocked. Instead, they wondered why it took me so long to realize the obvious.

But something happened as I took my classes there, maybe a couple of things, that made me feel guarded about my writing. One was the introduction to criticism and rejection. I had always written privately, and with the exception of my teacher and my mother, no one else saw my work. Sharing it, I discovered, did not often lead to praise. Classmates would say when they found my work boring or vague or convoluted – as they should have, but I wasn’t used to this. The second thing that happened was I learned how to tap the jugular and speak all of the things nice girls don’t say out loud. When I left CMU, I left with a habit of keeping my writing private. Even when my work was published, I didn’t tell anyone.

I wrote and worked as an editor here and there for years and years, always considering it a hobby and keeping it to myself. And one day, my mom sent me an email that linked the Oprah Winfrey episode where James Frey’s mother learned that her son’s book had been picked for the Oprah Book Club. My mother was so moved by this, by how hysterically happy and proud Mrs. Frey was for her son. And I didn’t feel right.

My mom and I have always been close. And when I saw Mrs. Frey and my mother’s reaction to her, I realized that I’d shut my mother out from the largest part of who I am by not telling her that I still write and not letting her read my work. If I had given it more thought, I would have kept my secret because the truth is, it’s terrifying to let someone see your most intimate thoughts. I was fine letting her know where I thought I was smart or wise or compassionate, but that’s not always what my stories revealed.

I didn’t give this any thought and instead sent my kids to play next door, and I called her, crying. This was last November. And until I spoke to her, I didn’t realize how much I had kept from her, that I’d edited maybe 20 books, that I’d published and won awards and knew many of her favorite authors as friends. She didn’t know I had an agent or that I’d written a novel that featured a mother-daughter relationship. Ironically, the novel is about a girl who is so terrified of disappointing people that she tells little lies until no one knows her.

My mom cried and she wrote me beautiful and sad little notes that were full of more heart and understanding and fear than I’d expected. And I sent her my novel (the one I’m fixing right now), because this was what worried her most. And all I can say is that I wish you guys could know what it’s like to have my mom, not just as my friend, but as my number one reader. That’s all.

Ellen Meister will be here tomorrow (and tomorrow is also her birthday!). If your comments get caught in the filters for any reason, I’ll fix everything when I’m back. Wish me luck!