I’ll listen to just about any kind of music and enjoy it, but when it comes to lyrics, I’m picky. My favorite songwriters? Lucinda Williams, Joni Mitchell, Bob Dylan, . . . and Cameron McGill. 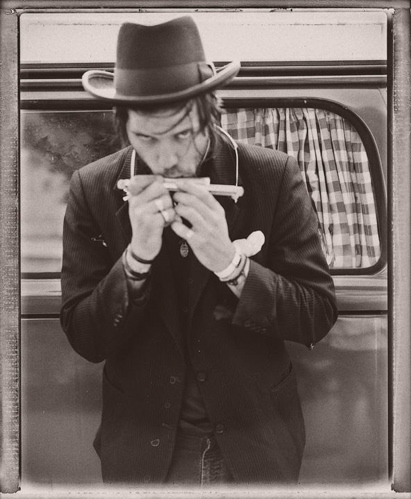 Here’s the opening of “When It Could Hurry” from the Street Ballads & Murderesques album:

i really should have tried to put up a fight
my word’s almost as good as yours and you lie all the time
what was it you always used to wish for
forgiveness in the face of coming age
but hell’s ceiling ain’t heaven’s floor
i wish i could say you shouldn’t worry,
but why would life take it’s time when it could hurry?

Cameron’s writing and his voice knock me flat, and he was generous enough to let me include 2 MP3s so you can hear for yourself. 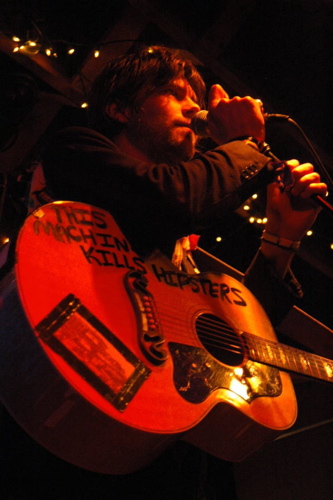 Make Out Face
Click the blue play button to hear Cameron while you enjoy the interview. (There will be another blue button near the end.)

Give me a little background about you, your band, your town.

Well, I seem to have difficulty connecting to all three of those these days, to be honest. So. I’ll give you the interview version. I am from the midwest and my band has always been me and whomever I can convince to give of their time. The Army incarnation from the last two years is the best band I’ve ever been in, but the gentlemen involved are all so very busy. We get done what we can, when we can. I think my error lies in trying to make it feel like a band, when at the end of the day, it’s not possible. When you are a solo artist, that’s it. People want to be in their own band. As much as I try to make it feel like that, it usually ends up with me at the piano, starting over from scratch. That being said, the record we just finished will be out early-mid next year, and that was nice to work on it within a group context to some degree.

Let’s see, my town was a place called Champaign, IL. I don’t know much about it anymore, other than it feels different every time I go back there. There are a lot of kind souls who have meant very much to me over the years. There are also lots of voids and some ghosts, but I know them so they are not scary.

I admire so much about your songwriting and singing, but I think what attracts me most to your music is the emotional surprises and unexpected directions you’ll take in a single song. Can you walk me through your process of writing a song? What comes first ”“ an emotion, a melody, a snippet of lyrics?

Well that is nice to hear. I am sure the reality of writing them is far less romantic than what might attract people to the finished piece. Any of the three things you listed can begin a song, though often times it is the absence of emotion, melody or lyrics that starts the process. The lyric snippet is now the bane of my existence, too many snippets to keep track of. I have never been an organized person in the traditional sense, but there are, for me, a tremendous amount of lyrics to go through and keep in rotation so I don’t forget about them. I just try my best not to lose songs.

I guess many of the songs start as poems or lyrics first and I might try a few different kinds of chord progressions or patterns along with them. I mostly write on the piano it seems these days, but after returning from this last tour, I did sit down with the guitar and write a group of songs that I will be recording in November. I am excited about their simplicity and directness. 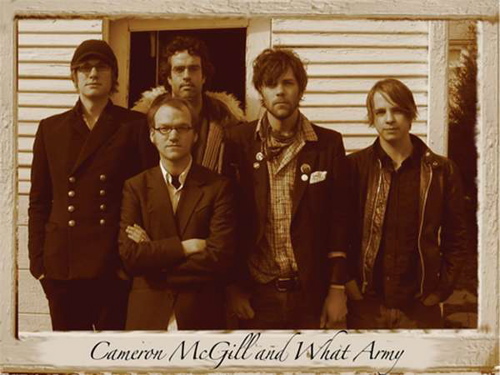 How long does it take to create a song? An album? (Do you still call them “albums”?)

Five minutes, five years. There are lines I am still trying to find homes for from years ago. Somehow they stick around on a back burner until you can use them correctly. Conceiving, writing and recording an album can take any amount of time, really. It just really depends on your given situation. My first record was recorded over a period of six months, off and on. My last record was entirely live and done in a few weeks. This newest record is somewhere in between. I like operating in both extremes, you have to approach them so differently as far as organizing sounds. But that is just the recording…some of the time done with the whole band live, some times tracks are more meticulously built. Mostly depends on who’s available and if there is studio time open and money to pay for it, and most importantly, how I feel like doing it at the time.

An instrument of some kind, my voice, being alone.

What do you consider breakouts – events or people or chance encounters that changed the level of your work or the direction of your career?

Not sure how many we’ve had. I guess for someone like me, it’s a lot of little things put together…all the touring, recording, promotion, etc. This year we had a few breakout shows – performing at Lollapalooza in Chicago and Summerfest in Milwaukee. As far as people go, Bob Dylan changed the way I write songs indefinitely…just that you can create a world in your mind and on paper that can actually effect change in the real world. The foxhole goes pretty deep on that, I have found. 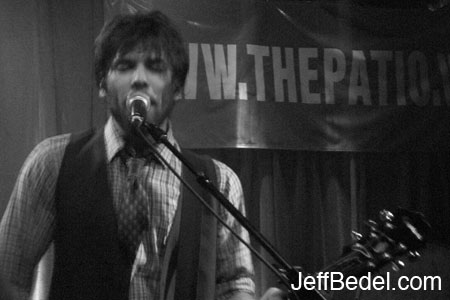 When did you start performing?

I guess when I was around 16. I think my first show was at a public swimming pool, I kid you not. Not sure I performed at all, but I did play a few songs.

Do you remember the first song you ever wrote?

I think my ma has it framed somewhere, I’ve lost track. It was probably overly sentimental and lyrically vague, like a first song must be, but I thought I was being serious. Or I was and I thought that was how I should be. Funny thing was, it was actually a tune that I later arranged for a chorus to sing at a local church. Figured I’d start big with a full choral ensemble for my first song. Since then I’ve scaled down, but not too much.

Talk to me about performances that flopped, songs you weren’t able to complete, the tough side of your work.

For me, performances flopped for a long time consecutively. I think that was called learning. I feel fairly comfortable on stage now, as comfortable as I might ever feel. Too many songs to mention that weren’t completed, give me time. The tough side of my work is so relative, right? There are civilians and aid workers living in war-torn countries and people starving all over the world. I have the privilege to be so selfish, and sit and think and write and play songs. I feel very lucky to be able to do that. It is the only thing I enjoy doing, thus I never do take it for granted.

Part of what I do involves a great amount time (writing) and physical and emotional effort (touring). I work on songs every day. There are days where you sit at the piano four or five hours to work on certain ideas. There is always an immense amount of writing, and revising (though sometimes you get something all the way done, completely right the first time), trying to organize the things you have written so you don’t lose them. Honestly, sometimes it’s miserable and I hate it, but somehow I can’t stop. Seems it’s the only thing in my life that voluntarily recharges itself every day. I will always enjoy finding words and a melody that sound pretty to me over some kind of a chord change. It’s that simple, I guess. 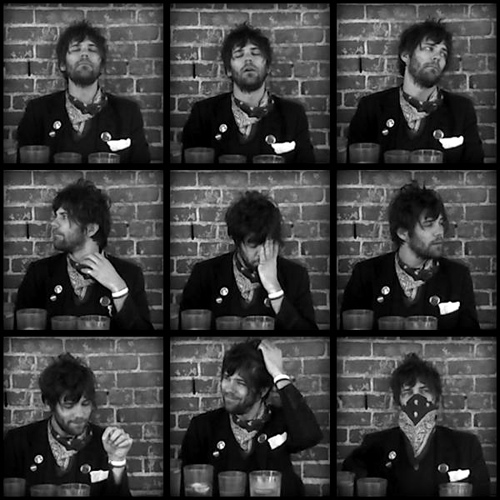 I enjoy reading your blog and was surprised to find how unglamorous the touring life is ”“ finding venues, finding cheap places to stay. Talk to me about touring.

At my level, touring is a tremendous amount of work physically and mentally. I enjoy it, but after 5-6 weeks you usually want to sleep in a bed and stay in one city for a few days and rest your mind.

I book all my own tours for the most part. This last tour I did with Matt Hopper, we booked together. Then when you are on the road, you are handling all the day to day, and yes, trying to find places to stay (never hotels), getting promo out to the clubs, advancing the dates to press, doing the whole MySpace thing to get folks there. Its always a long day, usually 8am or so till 3am, then again times 35 days or so. Wears you down.

You fight boredom during the day and being tired or sick, but then you always seem to get the energy for the show, that never ceases to amaze me. Oh, and the golden rule on touring for me is: All the problems you left at home when you started, will be waiting for you when you return, so you should deal with them before you leave. 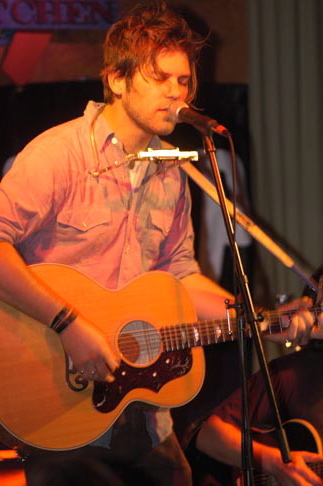 Tell me about performing at Lollapalooza.

It was like the little kids eating at the grown-up table for the first time; kinda messy, energetic, hectic, but a lot of fun

What musicians are you listening to these days?

Any musicians you’d really love to meet or collaborate with?

I am just about finished with the Cameron McGill and What Army full-length record, 12 songs. Hope to have that out in the spring. Am going to record an EP in MI with my friend Katie in November, and then start another full-length record. 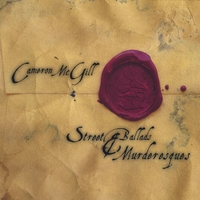 And finally, because lots of my readers are authors, what are some of your favorite books?

I am in love with the poetry of Charles Simic, specifically Walking the Black Cat and Hotel Insomnia. Also, Frank O’Hara‘s collected poems. One of my favorite books is Tom Robbins, Jitterbug Perfume.

If you like, subscribe to Cameron’s tour blog, make him your MySpace friend, buy his music, support good songwriting. And for those of you who are not psychotic or dangerous, offer him a place to stay when he performs in your town.