Write down every idea before it’s gone. Use the backs of envelopes and gas receipts if you’re driving. On one of those slips is your breakout story:

Mother dances salsa in front of the mirror in a stolen dress.

Suicidal student has habit of sucking on pennies she finds on the street.

Kid sits under basement stairs in a suitcase, watching an unplugged TV set. (Put it in third person so people don’t know it’s you.)

If you don’t write it down, you’ll waste your gift. 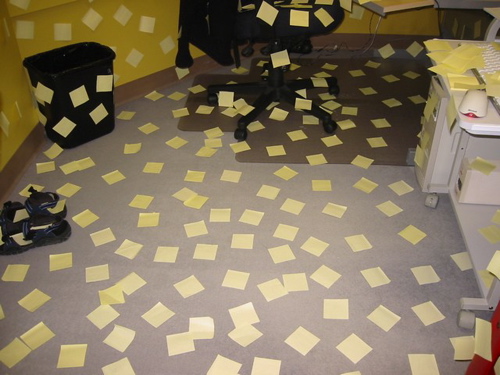 I drive with a pen between my teeth, holding the paper against the steering wheel when I write. Never mind the honking. I roll the windows up or the hundreds of story ideas littering the passenger seat will blow onto the highway, and then someone else might write my breakout story. 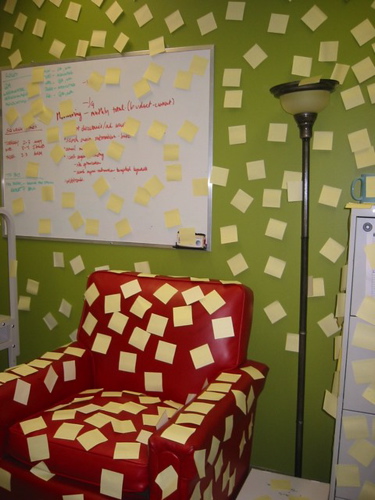 This blog post is now over at FRESH YARN.

Thanks to those of you who answered the question of the week: PD, who tried another writer’s idea of using post-it notes, but couldn’t keep track of them so goes for a pocket-sized notebook; Katrina, who uses a legal pad; Andy, who keeps a good four half-finished books on the backburner (me, too!) and lets the ideas mount up; Ellen, who stores her ideas in her porous and forgetful mind; Sarah, who carries a number of themed notebooks with her (geek!); Aimee, who still has an idea notebook she started in high school and uses snippets for inspiration; Lance, who records his random thoughts in Moleskine notebooks but also tacks ideas, torn pictures from magazines and index cards all over his “idea walls”; Paula, who can work with lists but finds snippets to be incoherent or ridiculous and melodramatic; Lori, who keeps a pencil and pad by the bed and fills spiral notebooks with random thoughts, character traits and settings (me, too, Lori); Robin, who is blessed with a Gaiman-signed Moleskine and also uses elementary composition books; Carolyn, who uses a pocket PC to record story ideas, good titles, and other scraps; Tish, whose post-it notes are stuck to the base of her computer screen; Amy, who has a box of half-full notebooks beside her desk and prefers those Clairefontaine notebooks with grids and colored pages; Dennis, who treated us to a poem about the snippets we’ll hate in the morning (Hey, Dennis, if you’re interested in La Brea, Amy Wilentz talks about it a lot in her new book); Claire, who uses her blog for snippets (good one!), where she tries to expand them into full ideas; Lauren, who says, “It’s all here somewhere”; Anneliese, who has a fancy orange silk Moleskine with a pocket in the back and who alerted me to a great interview with Janet Fitch ( http://www.drinkswithtony.com/janetfitch.html ); Shelley, who used some several year old snippets just recently; Noria, who writes her snippets right in her appointment book so they get used; Gail, who uses my method of having them on every receipt and envelope and check stub; Mark, who likes to get his large idea first so the he has a place to put all of the snippets that come along (oh, if only my brain could operate this way); Juliet, who needs to post a link to her book launch information (Congratulations!); Joe, who writes ideas down on everything, including parking tickets, and never throws them away (p.s., I think it gets way easier); Ric, who’s filled two filing cabinet drawers with journals and also goes for the blue (shorter) legal pads; Darrin, who calls snippets “those restless orphans” and wonders if he’ll ever find homes for them all; Jordan, who can keep the information straight in her head, but once she extracts a snippet, panics about which category, which story, which notebook; and Aurelio, whose lower desk drawer is stuffed with story concepts, book titles, overhead conversations, and doodles. Thanks to everyone who played. And a big thank you to the talented and deadly-handsome Cameron McGill for the words and the music!

The fabulous Lance Reynald will be here tomorrow with SUSPENSION author, Robert Westfield. Join the fun!