A brush with death leads to following her dream.

I love talking to authors about their books and the road to publication. But my main reason for talking to authors is to show appreciation for their work in a business that’s likely beaten much of the life out of them. This is how I see it: A writer spends three years, maybe twenty-three years, writing a book. In that amount of time, they’ve racked up enough rejections to fill a drawer: “I just didn’t fall in love with it.” “We’ve recently purchased a story too similar to yours.” “I didn’t care enough for the narrator.” “Let us know when you have another.” 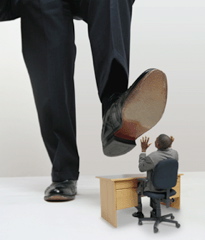 For the lucky few who make it so far as to see their books in print, they have to deal with lukewarm book reviews (or no reviews) and book tours with only the most faithful friends in attendance. They have family members who expect free copies of the book, friends who promised they’d buy the book but don’t, and colleagues who said, “Fingers crossed!” throughout their efforts and then become bitter and distant when those efforts finally lead to success. Their publishers report their poor sales. Their editors and agents try to tell them what to write next. For the amount of effort that goes in, a writer’s career nets very few tangible rewards.

My friend (and webmaster) Terry Bain taught me the habit of writing thank you notes to authors and saying, “I read your book and it moved me/changed me/inspired me.” This is why I do my blog, to say: You matter. Your books matter. Your unsold novels sitting on your hard drive matter. The life you’re trying to capture on paper, the wild things you imagine, the evocative words you write down, the story you wrestle with and can’t seem to get right–it all matters.

So now, let me introduce Bonnie Glover, author of THE MIDDLE SISTER (One World/Ballantine Books, 2005). This is the story of three sisters living in New York in the 1970’s. When their father leaves the family, they must move to the projects with their mother, who has become increasingly confused and unable to care for herself. It is a story of how individuals must shift their family roles and what they desire for themselves in order to survive as a unit. And if they can expand their definitions of love and family, they might find joy in the midst of tragedy. 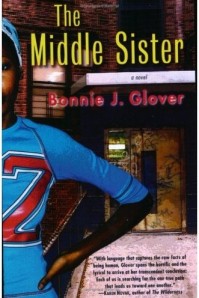 Bonnie, tell me something about you that would surprise my readers.

Hum – well, I almost died nine years ago. Came so close that the doctors told my husband to call everyone and get ready. Other women never tell you that having a baby is dangerous to your health go figure! I had eighty blood and blood product transfusions. I had to have physical therapy to help me walk again and I really, really looked awful.

All I could think about was getting home to my family and doing the things that I always said that I would do one of which was writing. About a year after my brush with death, my husband surprised me with my very own laptop and that was the fateful beginning. 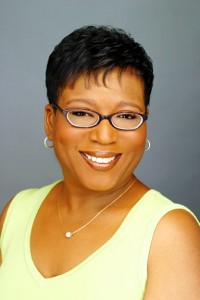 Tell me about THE MIDDLE SISTER (Ballantine, 2005) and how you first got the idea for the book?

THE MIDDLE SISTER was first a short story entitled “Searching with Kwai Chang” and was published in a Hong Kong journal called Yuan Yang. As a black kid growing up in the 70’s, the television show “Kung Fu” was one of my favorite shows. We watched and never understood what the hell was happening until Kwai Chang had to fight. We understood fighting and protecting yourself in East New York. We also understood family, loss and being poor. We had crazy people all over the place. I’ll always remember this lady who lived on my block walking up to me and pulling at my dress saying it was too short and commenting on the fact that I was well developed for my age. Only she didn’t say I was well developed. There were few niceties where we lived.

So, “THE MIDDLE SISTER” was born because I tried to blend many of my experiences growing up with even harsher realities: what would it be like growing up with an absent father, a crazy mother and two sisters?

When in the process did you find your agent, and describe the agent hunt?

Okay, I know some people might not want to read this so shut your eyes. This was easy for me because I was recommended to an agent by a friend that I had met over the internet. We met on Zoetrope. He was living in India, I was in Florida. He came to the US to attend a writer’s colony, Ledig House in upstate New York. We met. He got an agent and told her about my work and I sent Elizabeth Sheinkman of Elaine Markson and now, Curtis Brown too, a copy of my short story turned novel and liked it.

I about busted a gut when I got an agent.

Tell me about the book submission process–the ups and downs of it, and how you dealt with the stress of waiting.

It was around Christmas time when Elizabeth took me on as a client. She told me later that she almost didn’t take me because she was in the process of moving to the UK to set up the London branch of Elaine Markson. But she liked my characters and felt compelled to take me on after I cried and begged so hard. Big smile!

She submitted to my dream editor and this person turned TMS down because they had a very similar project in the works. That hurt. That’s the point where I said I wasn’t going to think about anything anymore. I was going to let Elizabeth do her job and I was going to worry about getting and keeping a day job. So, I know there were a few places that she sent my work to but I tried not to and still refuse to be the type of client that is constantly calling or emailing.

She called me one day out of the blue, I think it was February and told me that there was an editor at One World that was really digging “Searching with Kwai Chang” and wanted to speak with me. That’s when I lost it. When that editor called me, Elizabeth Dyssegaard (who is now at the Smithsonian), I could barely get out an intelligent sentence. She asked for my address so that she could give me an idea of some of the wonderful projects she had worked on and I couldn’t remember my address. I had to hunt for a bill to tell her what it was. Amazing!

Any stories about signing contracts, getting your advance, choosing cover art, gathering blurbs, or working with a publicist that you’d like to share? I love to hear all the behind the scenes work of getting a book off the ground.

As a first time author, although I was consulted and perhaps might have been able to change things if I hadn’t liked the cover, the art work and graphics was handled by One World. What got to me was the line editing. I think I must have gone through TMS a dozen times and still there are things that I missed. And then, I had to write more. TMS is not a great tome. In fact, it was even more slender when I first submitted it to Elizabeth Sheinkman. During the year and a half before publishing (yes, you have to get in line), I did a lot of creative thinking and conjuring. I didn’t want a mundane or ordinary first book.

How did it feel the first time you held the finished product in your hands?

But then I looked at the dedication and I started to cry again. Both my parents are deceased so I wanted to give this first one to them, especially since they lived right there in East New York with me.

Any stories to tell about book tours or book reviews?

Well, one time I did a reading with five people and that included my husband and my 7th and 8th grade math teacher. That was an experience. And too, picking something I could read without giving too much away and without offending people. TMS ain’t exactly for the faint of heart. When I gave a copy to the Pastor or our church, my husband asked me if I had warned him.

Any advice to writers who are just starting the process?

Advice to writers: Follow your dream. Things will click for you because it’s right and because you believe that it will. Stay up late, get up early, drag into work. Kiss your spouse. Put off sex. Or, have sex if it motivates you to write. Focus. Make it a priority. See your name on the spine of a book and get ready to do what you’ve been saying you would do. Love your gift. Put a pencil in the hand of your child and let her watch you while you work. Cry. Meditate. Watch that Nike commercial. And then take a deep breath and write.

Who are some of your favorite authors?

A new novel and the overall theme is generations. I know, very vague. But I hold my cards close, just like my daddy taught me.