Tips from One Cool Publicist

I want to introduce you to Lauren Cerand. She’s an independent public relations representative and consultant based in New York. She writes about art, politics and style at LuxLotus.com. And best of all, she’s willing to play a little. So here she is with . . . . 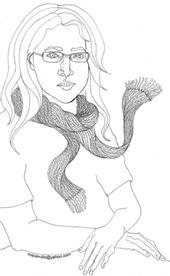 “Seven Songs that Will Change the Way You Think About Publicity”

A.D. 2000, ERYKAH BADU (www.erykahbadu.com): With its soft and yet not exactly mournful refrain of “No you won’t be name’n no buildings after me,” A.D. 2000 is a gentle reminder to keep a sense of perspective when things seem too intense. Your book (or film, or exhibition, or album, etc.) could very well change your life, or at least the course of your career. But don’t lose sight of the big picture. Donate the proceeds of one of your promotional events to charity. And, as soon as you’ve achieved some success, seek out opportunities to mentor someone just starting out in your field.

NEW YORK HERALD TRIBUNE, MARTIAL SOLAL (From Godard’s BREATHLESS): Total world domination is an admirable goal in publicity, but I often encourage my clients to focus their personal, often highly subjective aims for media outreach around a given project. What’s the most important thing to you? Gaining a specific new opportunity? Cracking one publication that towers above all others in your opinion? Reading at a particularly hot venue? Begin with what matters most to you and expand from there.

SAILOR GIRL, SOPHIE AUSTER (www.sophieauster.com): Collaborating with One Ring Zero, Auster takes two things often languishing on the margins, unfairly so — poetry and literature in translation — and shines dramatic light on both with her ethereal, enchanting songs. Tying your project into popular culture should always be a key initiative of any publicity campaign. Punk rock buttons are nice, a la Tayari Jones.

INTERNET GOIN NUTZ, PAUL WALL (www.djpaulwall.com): Wall is my favorite rapper because he is so ridiculously country but all of that and his fabulous grill aside, he understands how buzz works. Starting out as an up-and-comer in a strictly local scene and building a national presence through relentless street team and other promotional efforts, Paul wall may have intended this song to be yet another paean to his smooth Casanova-like abilities, but it also serves as a call to action for anyone anywhere trying to get the word out about any project. As my friend Liberation’s online ads for his design firm say, “It’s 2006 where’s your f@!..ing web site?” And, spending a few minutes a day tapping into the networking potential of MySpace (Hint: set up a “Music” profile and upload audio clips of you, or a friend with a flair for drama, reading small choice excerpts of your work) is far more effective than compulsively checking your Amazon ranking. Marcy Dermansky, author of TWINS, has more than 3,000 friends and always saves her “top 8” on her profile for pals who share the names of the main characters in her breakout debut novel. Robert Frenay’s new nonfiction book, PULSE, is being released simultaneously in bookstores and online at pulsethebook.com.

CAREER OPPORTUNITIES, THE CLASH: Too often people resist breaking out of their limited social circle or maximizing their network to get the word out about their book, art exhibition, film, or other endeavor. But besides “everything happens at parties,” the other adage I live by comes from The Clash, in that “Career opportunities are the ones that never knock.” Always have a stack of stylish, evergreen (read: no dates) postcards with you to hand out in lieu of business cards, and never say no to invitations or chances to meet new people, no matter how seemingly insignificant, unless you have a very good reason (trepidation doesn’t count). I started doing cultural publicity in New York when I hit it off with the broker who was showing me apartments and who also happened to be the director of an organization called Emerging Arts (www.emergingarts.com). And never, ever pass up a chance to help someone else out! Peter S. Temes’ THE POWER OF PURPOSE: LIVING WELL BY DOING GOOD is a blueprint for success in this regard.

LICENSE TO CONFUSE, SEBADOH: The filmmakers of QUALITY OF LIFE (www.qualityoflife-themovie.com), an independently made and distributed graffiti film out of San Francisco, consistently amaze me with their dedication and the scope of their efforts. Their recent East Coast premiere in New York sold out weeks before they arrived from the opposite side of the country (it plays through this weekend). This song is from the soundtrack and it’s particularly meaningful because it also serves as a reminder of how important it is to target your message. While it’s essential to have the right priorities and the resources to back them up, it’s also essential to note that opportunities for media coverage aren’t continuous. The news operates in a cycle and you need to maximize your relatively few shots to break through the static and make some noise. One killer press release with a customized pitch sent to the dozen perfect contacts beats a too-frequent mass mailing every time. You definitely don’t have a “license to confuse” when it comes to PR.

CHAISE A TOKYO, BENJAMIN BIOLAY (www.benjaminbiolay.com): The video for this incontrovertibly catchy song features Biolay, wearing a suit and smoking while rotating on a circular platform as French cabaret dancers sing the chorus before an audience of Japanese tourists who clap excitedly at the end. Although there’s a lot going on the entire time, everyone stays calm, cool and collected. Events will never go exactly as planned. Your job is simply to act as though you expected everything to happen, and that it’s the most natural thing in the world to breezily solve a potential crisis on the go. Be Zen.