Brad Listi is the best blogger on the internet. I have no qualms at all about stating that. If you haven’t read his blog, it’s a work of art. Part stand-up comedien, part social commentator, Brad creates a masterpiece everyday, and is always mindful of our short attention spans.

So I talked with Brad about luck. He believes he’s had some – from birth to publishing his bestselling book – out in paperback just yesterday. He’s a great and generous writer who has discovered a lot of up-and-coming writers. I’m going to venture to say that you’ll feel better after reading this interview. 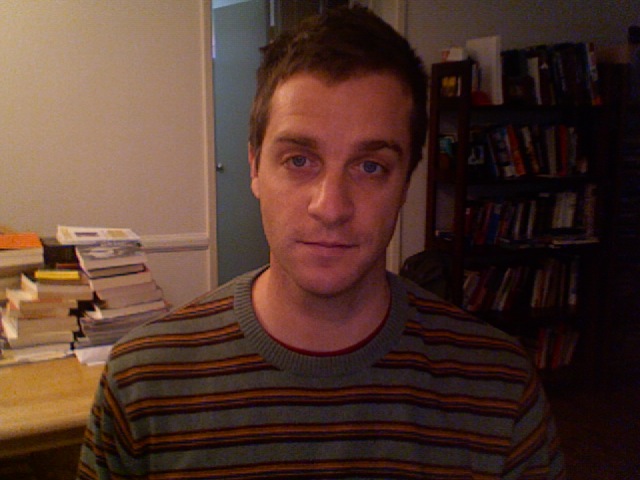 Do you believe in luck?

There’s a quote from E.B. White, who once said that luck is not something you can mention in the presence of self-made men. I would disagree. I believe that luck is something you can’t mention in the presence of extreme egomaniacs. Because only an extreme egomaniac – no matter how self-made he is – would be offended by the notion that all of his grand success isn’t his own doing entirely.

Along those same lines, the British historian Edward Gibbon once said that the winds and waves are always on the side of the ablest navigators. Again, I find myself in disagreement here. Try telling that to Dick Scobee, the commander of the Space Shuttle Challenger. Or Amelia Earhart. Or even a guy like Edward John Smith.

Good luck and bad luck float around. In a lot of instances, I don’t really see any rhyme or reason to it. And I’m not a big believer in a humanistic, puppeteer-like God.

Ultimately I’m inclined to believe that dumb luck plays a big role in life. And by dumb luck I mean luck we play no conscious part in and have little to no control of; luck without a conscience. And sure, I’m willing to concede that the luck may only be “dumb” based on the limitations of human perception. Maybe what seems dumb or blind – or even tragic – to my mind is actually a part of some majestic, grand design, a matter of intricate cause and effect. Maybe when Amelia Earhart’s plane did a nosedive and the crew of the Challenger was incinerated, it was actually a remarkable stroke of cosmic luck that my limited brain can’t really comprehend. But even if that were the case, the brutality of that kind of possibility leaves me feeling edgy and ready to punch something.

I’ll end with two more quotes, the first from Jean Cocteau, who said: “Of course I believe in luck. How otherwise to explain the success of people you detest?”

That one makes me laugh.

The second quote is the famous one from Thomas Jefferson, who said: “I’m a great believer in luck, and I find the harder I work, the more I have of it.”

I don’t really agree with Jefferson in an absolute sense, because there are plenty of hardworking people on planet Earth who wind up getting Lou Gherig’s disease at a young age, but I guess if I had to pigeonhole myself, I would say that my feeling on the matter falls somewhere in between Jean Cocteau and the third president of the United States. 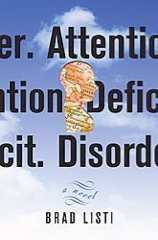 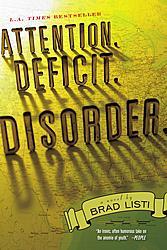 When you look at your career, what do you owe to luck verses hard work, determination, talent, networking?

I probably owe the majority of any success that I’ve had to luck.

Yes, I work really hard. Yes, I’m very determined and doggedly persistent. Yes, I’ve hustled and done everything in my power to remain positive and improve my lot in life. But ultimately, I’ve been incredibly lucky.

To be certain, my publishing success wouldn’t have happened had I not worked very hard and been savvy, and so on. But it could have just as easily have not happened, too, despite all of those things. Plenty of hardworking people, many of whom are far more talented than I, don’t get the ride that I’ve gotten. I’m well aware of that fact, and it’s humbling. 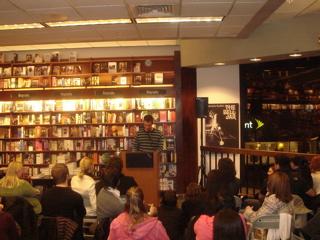 Do you think luck happens to people who don’t also do hard work and so on, or does that increase your chance of getting lucky?

I can see how hard work and luck often coincide. There seems to be some credence to that notion, some evidence for it in the world.

It also appears to be the kind of thing that the great majority of people tell themselves when they get up to go to work every morning. It’s the mantra of the working stiff. It might very well be one of those pleasant little lies that we tell ourselves in a desperate attempt to make our cubicles feel more tolerable.

And some people who work really hard get hit by trains, and so on.

In the same breath, I also believe that sometimes people just get stupidly, insanely lucky for no good reason at all. Lazy, degenerate, rude, intolerable people sometimes win the lottery – it’s a fact. They are born on cloudless spring days, and birds land on their shoulders.

And it can get even worse, I suspect.

Somewhere in the world, there probably exists a good-hearted man with a 200-foot yacht, an inherited bankroll in the hundreds of millions of dollars, a terrific sense of humor, and a ten-inch penis. He speaks four languages fluently and gives huge amounts of money to worthy causes. He looks like a cross between John F. Kennedy, Jr. and Jakob Dylan, and he plays the electric guitar with God-given flair and proficiency.

Tell me what appearing on the bestseller list did or didn’t change in your mood, your career.

Being on the bestseller list definitely changed my mood. I found out about it on a Sunday morning and spent about eleven hours in an unruly state of crazed elation, thinking that I was going to be instantly rich and famous. I was talking to a lot of people on the telephone, and I kept on hugging my girlfriend (who is now my fiancÃ©e). My imagination did a temporary number on me. I saw myself swarmed at bookstores from coast to coast. I saw myself leading a hip, reclusive, international lifestyle, owning multiple places of residence around the world, fathering ten beautiful children, putting them all through private school, and entertaining a concubine in my spare time.

Then I woke up and paid my rent. 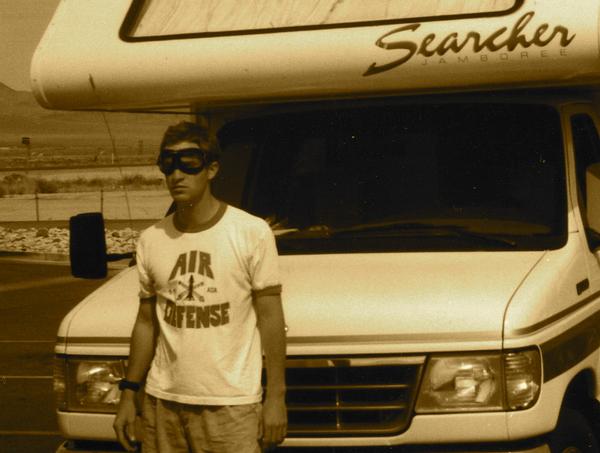 How would you describe A.D.D., and how did you come up with the title?

The irony, of course, is that I get asked this question more often than I get asked pretty much anything. And so naturally I have some answers that I’ve developed in an effort to properly explain myself:

1.) Attention. Deficit. Disorder. is a contemporary rendition of the classic coming of age novel.

2.) Attention. Deficit. Disorder. is about the difficulties inherent in trying to find meaning in the so-called Age of Information.

3.) Attention. Deficit. Disorder. is about a guy whose ex-girlfriend kills herself and had an abortion but never actually told him about it and so then it becomes this kind of picaresque road novel with lots of thematically relevant nonfiction non sequiturs that attempt to reflect and replicate what it’s like to try to find meaning in an age of information overload, but please don’t think that the book is some kind of hugely depressing bummer like Sophie’s Choice or anything, because it’s actually got quite a few laughs in it, and ultimately it’s meant to uplift people and give them hope, rather than crush them and make them feel sad.

As to where I came up with the title: I had a little piece of paper in my desk drawer as I was writing the manuscript, and I would jot down title ideas whenever they came to mind. Attention. Deficit. Disorder. happened one day as an offshoot of what I was doing with the novel from a structural point of view. It just popped into my head, and I wrote down the words. I looked at them and considered them individually, laughed, and put a period after each one. And then it made sense. 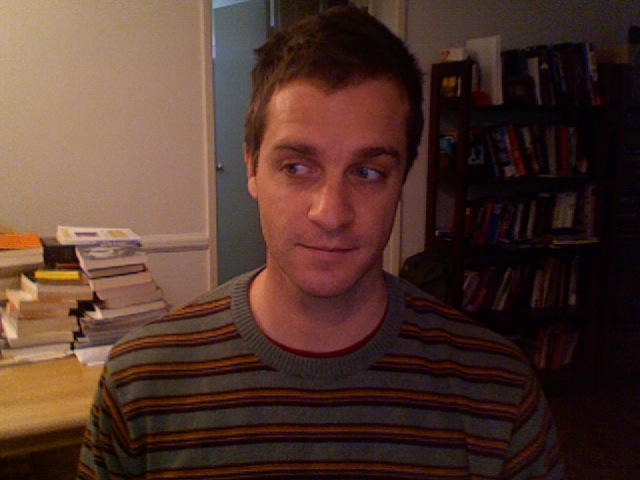 Describe your fans to me — why do you think they’re so attached to this book and to your blog?

My readers are great. I love them. I’m aware of the fact that there are a lot of books out there on the shelf. When someone takes the time to read my novel, and then has the decency to like it: Jesus. I appreciate the kindness enormously.

That said, I don’t really feel qualified to speak on their behalf, as they all have their own reasons for liking (or even kind of liking) Attention. Deficit. Disorder. If I had to venture a guess, though, I would say it’s probably pretty simple. It’s probably because they like the story and can relate to the characters. The novel entertains them and edifies them, and it moves them emotionally, and at its best, it maybe even changes the way they see the world a little bit. It does, I hope, what good books do.

And I also think it probably has something to do with the fact that I’m very willing to engage people. I’m pretty easygoing, and I try to be honest. I’m not insulated. If someone reads my book and my blog and sends me an email or a letter, I always write them back. I take the time to talk with my readers, and I’m consistent with it. I try to be friendly and genuine and have good manners, and so on.

What would you say to those writers who haven’t experienced luck in their careers?

Do drugs. Hard ones, preferably. Drugs will help you to numb yourself against the toxic feelings of bitterness that could easily overwhelm a lesser, more sober man.

And aside from that, I would probably suggest expanding one’s definition of luck. If you’re healthy, and you’re writing, and you have the time to write and the mind to write and the freedom to say whatever you want, creatively, then on many levels you have ample cause to feel fortunate in a very concrete way – New York publishers be damned.

In my experience, it’s the doing of the thing that always brings me the most joy, anyway. The greatest happiness I feel as a writer is not when I’m signing a publishing contract or looking at my book on the shelf or giving a reading at a bookstore. Those things are great, sure, but the most fun I ever have is when I’m locked in my bedroom office, hunched over my keyboard with the headphones on, trying to put the words in the right order. At times, the work can be incredibly frustrating. But even when it’s at its worst, I’m always careful to remind myself how much fun it ultimately is. It’s kids’ stuff, really. It’s storytelling. It’s imagination hour. So enjoy the doing. Make it fun. Make it big. Make it weird. Make it big and fun and weird. Why not?

And then beyond that, hope that in the long run somebody will pay you lots and lots of money for your big fun weirdness, so that you can buy more drugs and live a hip, reclusive, international lifestyle with your beautiful spouse and your ten beautiful children and your massive, adoring concubine in the middle of the Indian Ocean on a 200-foot yacht called Ha.