Where were you in the 80s? And what were you doing? 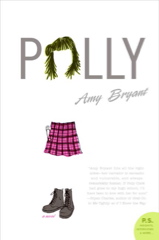 Wednesday, Amy Bryant will be here to talk about POLLY, her book set in the 1980s and featuring a teenager who wears a bracelet made of fish hooks and listens to hardcore punk.

I’ll see you then. But in the meantime, if you’re on MySpace, you can make Amy your friend.

Attention, please: Next week, I’m expecting the traffic to be very very heavy. I’m not entirely sure my site or the photos I’ll be posting can withstand the traffic. And to complicate things, I’ll be on jury duty most of the day. So, if you’re interested in being in on the fun, I’m going to ask you to subscribe to the RSS feed now. The RSS view of the site should not crash. Okay, that’s all and thanks!