I would never dream of having Neil Gaiman on LitPark without including the incomparable Robin Slick, whose blog is an odd and awesome mix of rock n’ roll, erotica, and Neil.

Before I turn things over to Robin, I have to tell a funny story. Robin and I had known each other for years from the Zoetrope online writer’s workshop, but one of the first times we met in real life was a classic moment of bonding. We were at a large, loud roundtable of fabulous writers. And people who know me well know I rely heavily on lip-reading to follow a conversation. People who know me casually almost never notice this because I can be a good faker. In a crowd, when there’s more than one conversation going on, or someone has their back to me, this is harder to do.

Okay, so Robin and I are sitting together, and we’ve both ditched the idea of having this cross-table talk with everyone in the room and just start talking to each other. But the background noise is still there, and I’m missing words and parts of words. The topic of conversation happened to be “middle-age erotica,” something Robin specializes in writing. Not only did I misunderstand the topic to be “middle-eastern erotica,” but I found I had plenty to say on the topic.

Two things often happen when you have rotten hearing – one is that people treat you weird and the other is that they leave you out. Robin, did neither. When it was clear to both of us that I’d taken the conversation out to the moon, Robin first tried to make me feel better by bragging how she couldn’t see well enough to read the menu, and then we started laughing so hard, we were crying. I’ve got Robin’s back for ever and ever, for hundreds of reasons, but this is one of them.

Robin is a writer of fast-paced, comedic heartbreak. One day, I’ll have to bring her back to talk about her own writing, but today she’s here to talk about Neil’s FRAGILE THINGS. 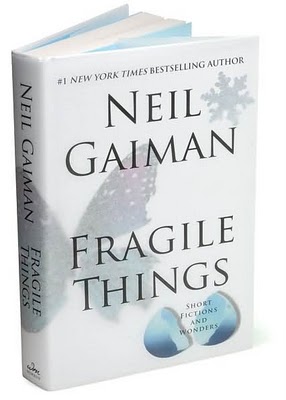 Here’s Robin introducing next week’s guest and his newest book . . . 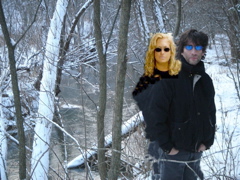 Well, anyway, it’s true ”“ I do love it and Fragile Things was an extra-special treat for me because having just discovered Neil Gaiman last year, I hadn’t read at least 3/4 of the stories in the collection even though many were award winners previously published in magazines and anthologies. Oh yeah, did I mention I really thought I was the person responsible for “discovering” Neil Gaiman? Don’t ask. I found his book “Smoke and Mirrors” on my shelf last summer, grabbed it to take with me on vacation because I knew I didn’t read or buy it and wondered what the hell it was doing there ”“ all I can tell you is that each short story took my breath away and I couldn’t wait to return home to Philadelphia and tell all of my friends about this brilliant “new” author I’d found. Imagine my embarrassment when I googled him”¦last time I checked he’s got six million, two hundred ten thousand Google results by just typing in “Gaiman”. In any event, in case you are wondering, the mystery was later solved when my son saw me with the book and moaned “Oh my god, what are you doing with that ”“ it belongs to my ex-girlfriend and she nagged me for a year that she wanted it back only I couldn’t find it.”

It was right in the bookcase and the little wench who played with my son’s affections can’t have it back now because I got Neil to sign it when I saw him read at Temple University in January. 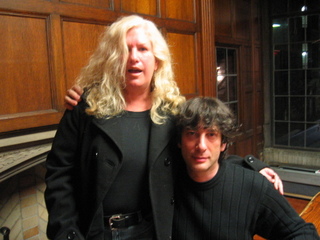 Please excuse the fact that I look like I’m having a stroke ”“ the truth of the matter is, I was. Anyway, that’s where I had my first exposure to “How to Talk to Girls at Parties”, one of the numerous highlights in “Fragile Things” but I was far too riveted by Neil’s drop dead gorgeous face (Ohh”¦those heavy lidded eyes”¦that smile”¦that tousled mop of dark, wavy hair) and sexy British accent to pay proper attention. So even though the story blew me away on the spot, I didn’t get the full impact until I was curled up on the sofa reading it in print.

One thing I kept asking myself while devouring each story: What goes on in this man’s brain that enables him to write like this? I want to climb in and find out.

(She said chastely”¦ okay, she is really lying but whatever.) 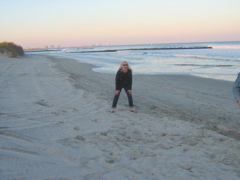 What I really meant was: How does anyone have such a glorious imagination? I know with my own writing, most of it comes from personal experience one way or the other; even my fumbling attempts at speculative fiction contain some autobiographical elements.

Oh my God. Please let me get those very same ideas. I want to write stories like those in Fragile Things ”“ tales like “October in the Chair” featuring the twelve months of the year roasting huge sausages on a stick which spat and crackled as fat dripped onto the burning applewood ”“ and have characters who turn out to (allegedly) be mortal-like men and women who meet every thirty/thirty-one days in a bizarre kind of book club situation”¦or “Sunbird”, where a group of eccentric gourmets eat a hell of a lot more than Cassolette d’escargots aux noisettes en hommage Ã  Monsieur Cleuvenot (that would be snails in hazelnut garlic butter to you)”¦or how I’d love to have written “Closing Time,” an amazing mix of club and ghost story which includes a luminous, disembodied green hand – in fact, it’s been given the name of Green Hand by young students and it’s rumored that those who see it die soon after but trust me, that’s just the tip of the iceberg in this 2004 Locus Award Winning Best Short Story. 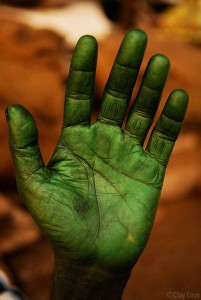 Um, Susan? Is it a coincidence your young son colored his hand a lovely shade of emerald and is henceforth known in your blog as “Green Hand” Henderson? I think not!

When I read “The Flints of Memory Lane”, I pictured a terrified young Neil calling his parents for a ride home after witnessing something decidedly supernatural ”“ and what a joy it was to go back and read his introduction and find out that it is in fact a true story after all and I have to admit, after learning that, a small part of me thought “Aha! He is otherworldly ”“ he’s a chosen one ”“ that’s how he’s able to write these things”.

I have no idea what I mean by that exactly, nor do I know why I’m ending this review with another Neil quote which has absolutely nothing at all to do with Fragile Things ”“ I guess I’m including it because it broke me up laughing:

“Is the chemical aftertaste the reason why people eat hot dogs, or is it some kind of bonus?”

Robin Slick is the author of THREE DAYS IN NEW YORK CITY and ANOTHER BITE OF THE APPLE, erotic comedic novels published by Mundania/Phaze Press. Her short stories have appeared everywhere from heady places like In Posse Review and Slow Trains Literary Journal to give-heady places like Clean Sheets. She lives vicariously through her rock star offspring Julie and Eric Slick, who were featured in the Picturehouse Films documentary, Rock School, and are now members of the Adrian Belew Power Trio. Visit her online at her website and In Her Own Write, where she tries to blog daily about writing, Neil Gaiman (though not so much anymore now that her former computer-hating hippie husband has become a daily reader) rock music, and how much she abhors the Bush Administration.