Thank you to Enrico Casarosa for what came in the mail. Gorgeous! I’ll share soon when things aren’t so crazy. And Lance, we’re all thinking about you in Rock Creek. 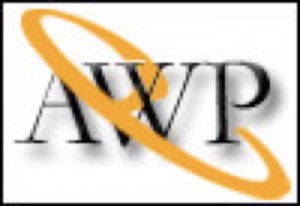 Okay. The Question of the Week concerned the AWP conference. AWP stands for the Association of Writers and Writing Programs, and each year they have a conference in a different city, where writers and editors and publishers congregate. Not the big guns – not Random House and The New Yorker and those types – but the medium to small guys, like Ploughshares, Tin House, Other Press, and so on. And what do they do when they congregate and how useful is all of this? Well, it depends. What I can do is share my experience of attending the AWP conference in Vancouver, and maybe that will shed a little light.

When I went to AWP two years ago, I was the managing editor of a little literary magazine called Night Train. We paid some reasonable fee to have a table at this conference, and the senior and founding editor, Rusty Barnes, went, as well. If you’ve ever run a small literary magazine, you know that there is always the issue of a miniscule budget. So with Night Train covering the expense of two tickets to Canada, two hotel rooms, and the cost of getting several boxes of the magazine there, as well, we did not want to waste our chance to make something of this trip. What did we want to accomplish? Basically, we wanted more people to know of our magazine, and we hoped they’d find that it was better than the others. And maybe, rather than meeting more people who wanted to submit their stories and add to our workload, we’d actually meet people who wanted to subscribe or even help fund the magazine.

Now imagine a long and hopeful plane ride in which small-time editors feel important and feel as though their time in Canada will lead to a new level of glory in the business. Also, imagine that they have brought along two things they do not get paid to do – one, to write the novel that is never good enough to send out, and two, to read about 70 stories that have been submitted to the magazine that week for potential publication, though all of them will get rejection letters. 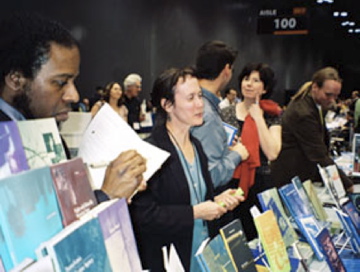 When I arrived in Canada, and waited in a customs line filled with hundreds of editors, I experienced what would be the beginning of my understanding that I am not really the introvert I always thought I was. In fact, I found that I was a closeted extrovert. And worse, later, when I told this to Mr. Henderson, I discovered that I was maybe the only one who ever believed I was shy.

Let the networking begin! In line, I chatted up editors, talked about Night Train, exchanged cards, and found that every editor there believed they were publishing “the best and edgiest fiction of our times.” We all looked slightly shocked and annoyed with each other when we said the names of our literary publications and heard each other say, “Hmm, I don’t know that one.” This theme is going to become increasingly important (and depressing) as my story of AWP continues

On to the conference. Now my focus, clearly, was on the bookfair portion of the conference, but when you sign in, you’re given a press-pass looking name tag and a catalogue of the most ridiculous number of overlapping panels. They had everything from panels of debut novelists talking about what they learned to readings by people I considered literary gods to absolutely trivial stuff that reminded me of joke Ph.D. dissertation topics. I moved right along to the bookfair. 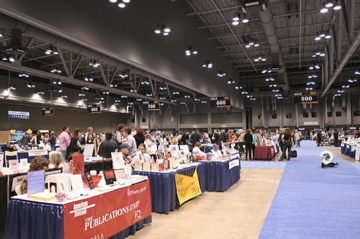 Imagine a giant room, the size of a ballroom, and now make a mouse maze within that room, using folding tables, and on each table are books containing “the best, edgiest fiction of our times.” Say there are thirty rows and in each row there are 20 folding tables touching, and the tables that don’t fit into the ballroom are lining the hallway. Okay, and now I sit at table 400-something while editors and conference goers wind their way through the mouse maze. Here we go!

Rusty preferred to sit at the table and talk geeky deep-sixed literature with those who stopped to say hello, and I ventured out, visiting every single table to get the pulse of each editor and magazine. From a writer’s perspective, that was probably the most useful thing I did in Vancouver because right away you learn which magazines are arrogant and clique-y, which are run by stodgy or just-this-side-of-the-mental-institution editors, and which ones are compatible with your own style. Once I went to every table, I found myself making frequent return-trips to Agni, Post Road, Bloom, Ninth Letter, and CLMP because, frankly, some people are way more fun to hang out with than others.

The idea of standing out became secondary to enjoying time with people who share your passions. The other thing was to get the best swag without looking greedy. “Swag,” for those of you who’ve never gotten any, means the free things (rulers, clocks, t-shirts) given to you with hopes that you’ll remember a particular publication. My kids, for example, got One Story tattoos from the Vancouver AWP. That is swag. 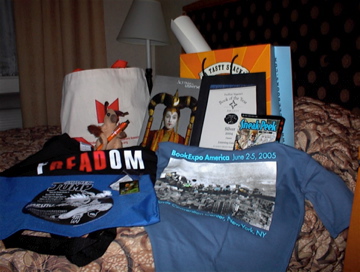 I roomed with my good friend, Gail Siegel, and staying up talking and eating and being overwhelmed together was really the best of the trip. Because, by day two of the conference, I definitely began to experience this “We’re all going to die” feeling. And by that, I mean the overwhelming sense that everyone is a writer and no one is a reader, that our dreams of making a profit were stupid because we couldn’t even give the magazines away. And who reads these little publications? And what of the poor fools who are there to hand-sell their genius novels and will be lucky to sell five?

It was really really depressing, because as each person left the conference, you started to see piles of brand new books (the books we’d all given away in hopes of our publications and our writers being discovered) lying all around the trash bins in the lobby. People were dumping books on the way to the airport – and I’d do the same – and it felt bad in ways that were deep and lasting.

Also lasting were friendships, of course, but it’s a mixed bag, and it puts a visual on the uphill journey of the writer. Maybe for some of you, it’s better not to have that visual weighing down your hope and confidence, which are the things we absolutely must hold on to in order to keep going.

Thanks to this week’s guest, Jeff Lependorf, who is the perfect blend of hopeful and practical in the world of indie publishing. And thank you to those who answered the Question of the Week: Gail Siegel, Robin Slick, Juliet, Carolyn Burns Bass, mikel k poet, Kim Chinquee, Lori Oliva, Terry, Lauren Baratz-Logsted, Marcy, Daryl, Alexander Chee, bruce hoppe, and J.D. Smith.

Finally, if you’re going to AWP and you take some good pictures, I’m happy to post them.