This week: AmyWallen at Trader Joe’s

It’s crazy how many big-time writers I know. Unfair, really. A person shouldn’t be allowed to know as many successful writers as I do. Especially if that person is, himself, an unsuccessful writer who has been slogging at the craft for a decade and a half, and who loathes himself for using words like “the craft.” And especially if that person has had to make certain compromises along the way, and he took a job at a pest control company where he has been forced to pen junk mail slogans like “Ants In Your Plants?” and “Bugs In Your Rugs?”

My pal Stephen Dobyns has written, like, five thousand books that are now part of many MFA curriculums. Bestselling amigo Josh Kilmer-Purcell is finishing up a big screenplay for Hollywood. But of all the writers in my circle who’ve hit it big, Amy Wallen is the one I know best, and her debut novel MOONPIES AND MOVIE STARS just reached number ten on last week’s Los Angeles Times bestseller list. 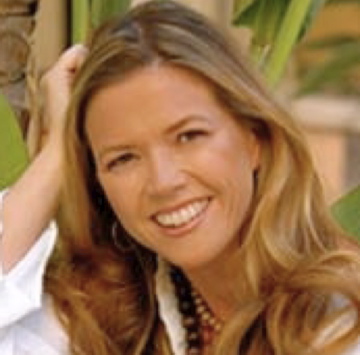 The writer Gore Vidal once said, “Every time a friend succeeds, I die a little.” Who in the world would say such a horrible thing out loud?

Besides, Amy and I have been comrades in the writing trenches for twelve years. We hang out together, and swap crude e-mails and insulting jabs. I don’t even call her by her real name. To me, she’s been “Amos” for as long as I can remember. I think that this bothers her. And I think that’s why I do it.

She dishes it out, too. I recently learned how to operate the cutting-edge technology known as MySpace. Amy is my only MySpace friend, and hers is my only comment: “Did you get a face lift? Your jowls don’t show in this photo.”

One night she coaxed each person in our writing group to bring in a piece that imitated my sparse, more “butch” style of prose. That was something. You haven’t lived until you’ve seen a room full of writers howling as they fight for their turn to read aloud and make a mockery of your craft.

To balance her chronic wickedness, Amy does a lot of volunteer work. One day a week she reads books to elementary school children in the tough part of town. To raise money for the non-profit San Diego Writers, Ink, she hosts a popular open-mic event called First Friday, where each month writers can bring three minutes of prose and try it out in front of a big audience (Each of these 3-minute stories are just a click away, free and in .mp3 form, at www.FirstFridayProse.com). She also leads a read & critique group, hosts a weekly drop-in writing practice group, and teaches a creative writing course at the University of California at San Diego. 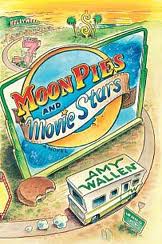 And then there’s another thing that she does to feel better about herself. She buys her groceries at Trader Joe’s. Do you have these in your part of the world? If not, check again tomorrow. The stores are spreading as fast as Starbucks and bird flu combined. Trader Joe’s is a Southern California chain that delivers organic-grain/holistic-produce/pesticide-free-yogurt/farm-fresh-hummus to hip, urban dwellers who receive large advances for first novels. Here are some things they don’t offer: Twinkies. Lucky Charms. Doritos. Peter Pan Chunky Peanut Butter. Pop Tarts. 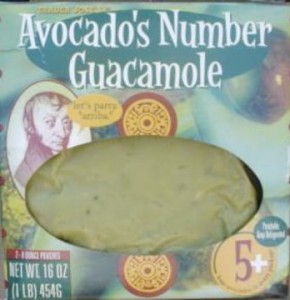 Amy tells me on the phone that she has to make a run to Trader Joe’s today. She needs “emergency guacamole.”

We decide to meet in the parking lot of the store in Hillcrest. When she sees me, though, she suddenly remembers that the trunk of her VW bug doesn’t have room for groceries today. It’s laden with shiny copies of MOONPIES AND MOVIE STARS. 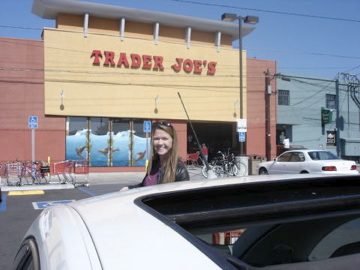 “The book tour”¦” she groans, as if to say, ’aren’t book tours a bitch?’ and I’m forced to wonder for a second if I’ve ever really liked her at all.

I’m supposed to interview her while she shops, inside the store. I have brought my recording gear.

“I should probably ask for permission,” I say. Amy agrees, and I go into the store, where I’m directed to a manager who, after hearing my request, looks at me as if I’ve asked to spray paint my gang affiliation across the gluten-free, buckwheat-flour bread rack.

This is another thing I forgot to mention about Trader Joe’s. Even though most of them are just wedged into strip malls, everybody acts like the stores are hallowed ground. The customers radiate an eerie, euphoric devotion that’s rarely seen outside, say, a Navajo sweat lodge. They’re evangelical, and they’re always saying things like, “Have you tried the new Wasabi Tamari Almonds yet?”

I’m not real surprised when the Trader Joe’s manager tells me that I can’t record inside the store, and I curse myself for going against my credo that it’s better to ask for forgiveness than permission. Amy suggests that we drive down the hill to another Trader Joe’s and “go clandestine.” Four minutes later, we’re at the next one. I strap the recorder over my shoulder and then cover myself with a big, heavy jacket that’s been sitting in the back of my truck for months. I bury the foot-long microphone in my inside pocket and loop the cable so I can tuck it into my waistband. 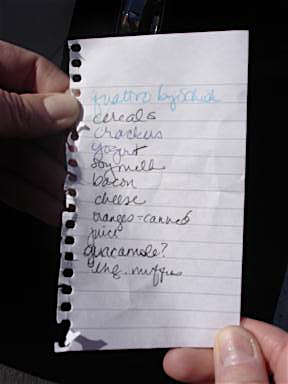 I decide I should push a cart in front of me. Amy’s shopping list is deceptively simple, and within thirty seconds she has already scratched off Trader Joe’s brand Applewood-Smoked Niman Ranch Bacon.

Also in the same refrigerator section is the ready-made Trader Jose’s Avocado’s Number Guacamole, “with 5+ avocados.” Ready-made guacamole offends me on about five-plus levels, but Amy tosses a package in her cart. It turns out that tonight is Taco Tuesday, a monthly dinner event with some of her writer friends. An event that I am just now hearing about for the first time ever. But before I can express my feelings about this, a Trader Joe’s employee gets in front of my face.

“How you doin’, buddy? What’s goin’ on?” The words are friendly, but the voice is not.

(Click here to listen to the 90-second “Emergency Guacamole/Here Comes the Fuzz” segment.)

We’ve now been inside the store for three minutes.

“They have the best cheese in the world,” Amy says, oblivious to the fascism. I realize now that she’s deep into this cult. She won’t even see the Kool-Aid coming. She places a wedge of Dubliner Irish Cheese in the cart, followed, a moment later, by a single Trader Joe’s Bean & Cheese Burrito.

We cross to the juice aisle and Amy grabs a jug of something called Dynamo+Calcium. She tries to remember if she used up the last of her Mango Anti-Oxidant Juice.

(Click here to listen to the 75-second “What Flavor Is Dynamo?” segment.)

We circle around an end-cap of hormone-free, free-range chicken eggs and start down the cracker aisle. 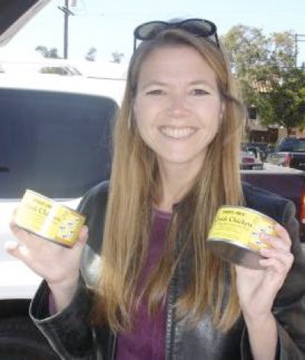 “This is a main staple for me,” she says. Everyday at lunch, it turns out, Amy eats chicken salad on crackers.

I ask her when the whole OCD Chicken Salad thing began.

We pass the booze aisle without even slowing. In the next aisle are cleaning supplies.

“Are you familiar with the Castile Soap?” Amy says. She holds up a bottle that looks like the jewelry cleaning solution my grandmother kept under the sink. Amy reads a list of uses from the back of the bottle, the last line of which states, “Enjoy only two cosmetics: enough sleep and Dr. Bronner’s Magic Soap to clean body, mind, soul, spirit — instantly uniting all as one.”

(Click here to listen to the 60-second “Castile Soap” segment.)

In the dairy section, Amy knocks two more items off her list: Trader Joe’s Lowfat Vanilla Soy Milk and Trader Joe’s Nonfat Vanilla Yogurt. These, she says, are building blocks for her greatest indulgence. She’s almost giddy now. At the end of the dairy fridge is a wall of hundreds of cereal boxes, not one of which I’ve ever seen before. No Lucky Charms. No Cap’n Crunch. Not even the fruit-based, healthy stuff, like Apple Jacks or Froot Loops. Trader Joe’s sells cereals called Organic Flax Plus, Wheatabix, Hemp Plus Granola ”“ and Amy’s favorites: Maple Pecan Granola and something called Just the Clusters Ginger, Almond, and Cashew Granola. She grabs two huge boxes of each. 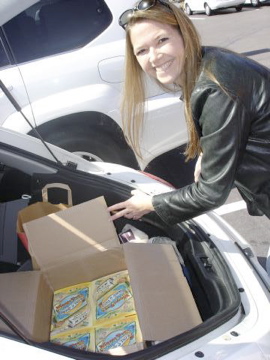 “This one I eat in the morning with soy milk,” she says, shaking the maple one. “And this one I eat with yogurt when I’m watching The Daily Show.”

(Click here to listen to the 2-minute“The Holy Grail of Cereals” segment.)

Soon, all that’s left is the produce section. The vegetables look fresh, but the signs say that everything is organic, and pesticide-free. I know that I’m probably biased by the job at the exterminating company, but when I learn that something is organic, I expect it to rot quickly. When something is pesticide-free, I expect it to be full of bugs. I mention this to Amy. Her response borders on Zen.

“Life is like a bag of spinach,” she says. “Sometimes you get a nice salad with a raspberry vinaigrette, and sometimes you die of E. coli.” 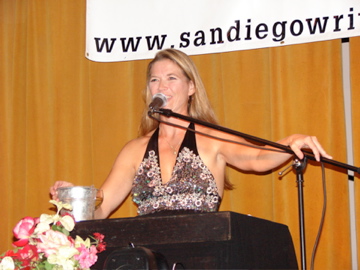 When she’s with important people, Amy will do things like wear sequins, and wash her hair.

We should talk about her novel, but we don’t. Don’t get me wrong ”“ MOONPIES AND MOVIE STARS is great. Too great. It’s funny. It’s sad. It’s had a bajillion stellar reviews, including one in the LA Times that said, in part, that Amy’s heartfelt narrative has “an important place in contemporary writing”¦ Eschewing detachment and irony”¦ Wallen scoots under our rib cage, right where the deepest hurts of the human condition lie. The best humor, after all, has it’s roots in pain.” She’s been invited to sit on a panel about humor writing at the upcoming Los Angeles Times Book Festival. Amy has an amazing website at www.AmyWallen.com. She is likeable. She’s funny. She’s pretty.

(SUSAN – THIS IS WHERE I PLAN TO MAGICALLY TIE IT ALL TOGETHER AND MAKE IT SEEM LIKE THE STORY IS REALLY ABOUT AMY, AND PEOPLE WILL FORGET HOW SELF-CENTERED I AM… THX”¦ James Spring, of www.JamesRSpring.com)

AMY WALLEN‘s favorites: The number 10, the letter A, the color teal, chicken salad, the XKE Jaguar, the song You Are My Sunshine, Catcher in the Rye, the short stories of Edgar Allen Poe and of Mary Gordon, the mimosa tree, dogs. She prefers plastic to paper bags.

JAMES R. SPRING is a writer, sort of, living in Southern California. When he’s not killing bugs or trying to sell manuscripts that he has worked his whole life to create, he does stories for THIS AMERICAN LIFE and other NPR outlets.