Thanks to BPM Smith at Word N’ Bass for a little pre-publicity on my novel! I appreciate it.

During a week when we discussed independent streaks and the indie presses who dare to publish groundbreaking literature for sometimes no profit at all, it seems fitting to begin the Weekly Wrap with a little Kurt Vonnegut, who died earlier this week. 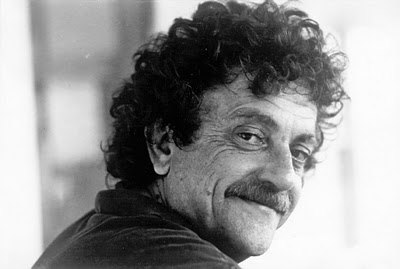 I know many of you knew Vonnegut as a cranky teacher, a stubborn and discouraging critic of your writing, but also a hero and maverick in the world of literature, and a writer who was bold with his wit and opinions. NPR’s Morning Edition has a nice tribute to him, including the passage below. And if you follow that link, you’ll also get to some great radio interviews:

Vonnegut’s most famous work was an iconic novel born out of his memories of war and its absurdities. Vonnegut’s mother killed herself when he was a young man leaving to serve in World War II. As a private in that war, he was captured by the Germans and imprisoned in a former slaughterhouse in the ancient German city of Dresden. From there he stepped out into the hellish, surreal landscape that Dresden became after it was firebombed. It took him 25 years to turn that experience into Slaughterhouse-Five.

When I prepared to interview for my first real job, I tried to dress the part of a professional. I wore one of my mother’s dresses, dug deep into my closet for a pair of heels, and bought a briefcase. Pretending to be mainstream made me feel a little silly and nervous, and after I shook hands with the woman who would interview me, I realized I’d been carrying the empty briefcase upside-down, price tag and all.

I got the job. But that was because the woman who interviewed me didn’t care much about packaging. She got right to the center of me, and soon we were talking about Maya Angelou and survivors and working with spunky teens. And we had a good laugh about the briefcase – because, honestly, if you can’t laugh, you are going to burn out real quick in my old line of work.

This organization and the people I tend to involve myself with the most are usually driven by passion. They buck the trends. They stand up against the system when necessary and won’t compromise what feels right in their hearts. These are the types I tend to meet at book festivals and small press gatherings. They’re not mainstream. They’re a bunch of book geeks who fell in love with Virgil and Larry Brown and Sarah Waters and Cornelius Eady before they fell in love in the real world.

The indie presses are invaluable to the literary community precisely because they are not chained to corporations or marketing teams. They are free to push boundaries of form and content, and they are responsible for helping new forms of writing like Mary Robison‘s Why Did I Ever? reach the mainstream. If there’s anything to remember from my blog today (besides the photo you’re about to see) it’s to remind you that small press books (and really ALL books) survive by word of mouth. If you like something, say something.

1. Use the time of a total stranger in such a way that he or she will not feel the time was wasted.

2. Give the reader at least one character he or she can root for.

3. Every character should want something, even if it is only a glass of water.

4. Every sentence must do one of two things — reveal character or advance the action.

5. Start as close to the end as possible.

6. Be a sadist. Now matter how sweet and innocent your leading characters, make awful things happen to them — in order that the reader may see what they are made of.

7. Write to please just one person. If you open a window and make love to the world, so to speak, your story will get pneumonia.

8. Give your readers as much information as possible as soon as possible. To heck with suspense. Readers should have such complete understanding of what is going on, where and why, that they could finish the story themselves, should cockroaches eat the last few pages.

Thank you to Kevin Sampsell for being here this week and for all he does at Powell’s and at Future Tense Books. And thanks to those of you who answered the Question of the Week: Suzanne, lance reynald, Nicole, Aurelio, Lauren Baratz-Logsted, Juliet, Robin Slick, Carolyn Burns Bass, mikel k, Simon Haynes, Betsy, Kimberly, Richard, Gail Siegel, Julie Ann Shapiro, Jason Boog, Noria, n.l. belardes, patry, dennis mahagin, Bruce Hoppe.

See you Monday with a brand new question!