I’ve got a deadline to make, so this will be a quick wrap. My answers to this week’s questions concerning the elementary school days….

What toys did you play with?

I searched but found NO photos of the awesome toy known as Wacky Clackers, so I tried to draw it for you. 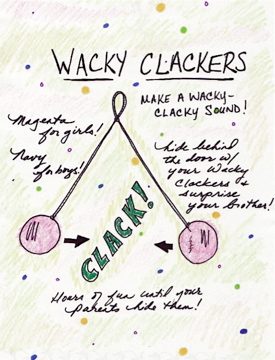 What games did you play?

I loved making prank phone calls with my friend, Eileen. I would call someone and pretend I was 5-years-old and lost. My job was to sound panicked, and to convince the person I had mis-dialed and meant to call my mother. Then I would give them Eileen’s number, and when they called back, Eileen would play the mother role. There was one woman who would blow a whistle into the phone whenever we rang. That put her at the top of our call-list, for sure.

Also at Eileen’s, we played an electric shock game. If you held the refrigerator handle at the same time as you held the metal strip around the counter, you’d get this volt that would make the hair on your arms stand up straight, and we used to see who could hold on the longest.

Towards the end of elementary school, I loved playing the fire-setting game with my friend, Mouse. We’d see how big a fire we could set and still put it out.

What kind of candy did you eat? 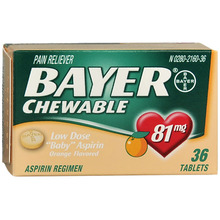 What was your first record?

A 45 of The Hues Corporation. (Turn up the volume before you click, then press the play arrow. Oh yeah!) 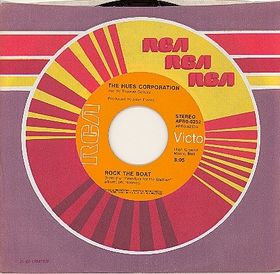 Thanks so much for a fun week of learning what you were like as a kiddo. Thanks to the awesome Lance Reynald (with the finished and stellar manuscript now available for interested agents, editors and publishers), and to his guest Michael Stusser. And finally, thank you to everyone who linked to LitPark this week: Robin Slick, Cafe Mom, Ellen Meister, How Not to Write, Lance Reynald, and The Publishing Spot. I appreciate those links!

P.S. Most frequently asked questions this month have been variations of Did you really film a TV pilot? Is the TV show going to air? Can you give some details? And the answer is, there’s very little I can say since the contract I signed said – if I remember correctly – that I’d be fined a million dollars per contract breech. Breach? No, breech looks better. But, yes, something was filmed. As far as I know, nothing is going to air. That’s probably a good thing. And that’s pretty much everything I can say about it. However, I will put an end to those pesky rumors that the show features me bungy-jumping, and later, hot-tubbing with Neil Gaiman. Those rumors are pure fantasy!

Okay, off to work on my book….