John Warner is the editor of the super-popular internet site, McSweeney’s. Recently, he was given his own humor imprint at Writer’s Digest. And today he’s here to play the Top 5 game with you. How does the Top 5 game work? John answers the question first, then you do, and then you check out all of his links!

Okay, here’s John. (I wonder if he knows I’ve blogged about him before?) 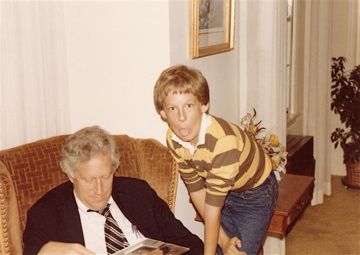 A portrait of the young artist as a smartass. I was probably about 11 years old.

Humor in literature often seems to get a bad rap, but for my money, writing a really funny book is about the hardest thing there is. I’d need several more hands and feet to count the number of books that have made me cry, i.e., Old Yeller; The Road; To Kill a Mockingbird; The George W. Bush Legacy; Scratch ‘n Sniff: Onions! Onions! Onions! and so on.

But really really funny books seem harder to come by, (shameless promotional pitch alert) which was one of my motivations for trying my hand at fostering an imprint for humor writing, Tow Books. Starting a humor imprint might be pretty dumb, but I given the low odds of success for any publishing venture, and for humor specifically, but even I wasn’t dumb enough to try to set out to publish humorous novels, because writing a really funny novel is very very difficult. 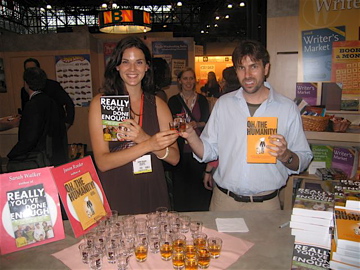 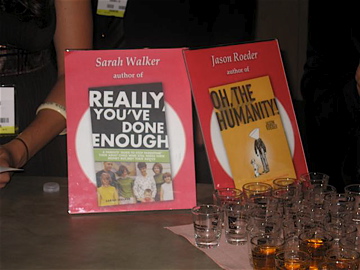 celebrating the release of their books 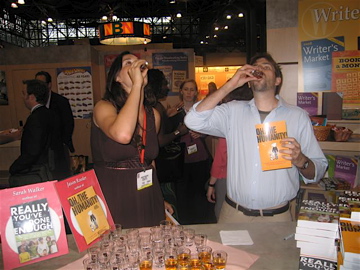 with shots of Jack Daniels

That said, when I think about my favorite novels of all time, most of them are funny, and they’re the ones I’m most likely to press upon friends or acquaintances or people who come to my door trying to sell grapefruit.

So, here’s my list of the Top 5 Funniest Novels of All-Time (That I’ve Read)

(Please note, these are in no particular order.)

The story of Fred “Bogus” Trumper, translator of Old Low Norse, failed husband, and possessor of a crooked urethra. There’s a couple of set pieces in here, including one of Trumper trying to learn to ski that makes me weep with laughter even after twenty readings. This was Irving’s last novel before The World According to Garp, a funny book in it’s own right, but not as funny as this one.

Lewis Miner (known as “Teabag”) writes letters to his high school alumni newsletter. This book almost got me tossed off a flight to New York because I was laughing so hard they thought I was a security risk.

3. Miss Lonelyhearts and The Day of the Locust by Nathanael West

Technically two novellas, but almost always sold in a single volume. It’s really astounding when you read these and realize they were written in the early 1930’s. They feel completely contemporary to this day, maybe more so than ever, particularly Day of the Locust, a satire of Hollywood emptiness.

4. The Columnist By Jeffrey Frank

A satirical “memoir” of Brandon Sladder, a Zelig-like Washington insider and columnist. During his book tours David Sedaris always recommends a book by another writer, and several years ago, he was recommending The Columnist, claiming it had more laughs per page than anything he’d read. He wasn’t wrong.

As a possessor of a graduate degree, and a teacher of college, I have a serious weakness for the campus satire, and as I brainstormed my list, I realized that I could’ve quite easily filled the entire list with them. Instead, I’ll just list some of my favorites.

The Lecturer’s Tale by James Hynes

So, my online friends, what are the funniest novels you’ve ever read?

John Warner is Chief Creative Czar of Tow Books, a new publishing imprint focusing on funny books for people with good senses of humor. The first titles, Really, You’ve Done Enough: A Parents’ Guide to Stop Parenting Their Adult Child Who Still Needs Their Money But Not Their Advice by Sarah Walker, and Oh, the Humanity: A Gentle Guide to Social Interaction for the Feeble Young Introvert by Jason Roeder were recently released. He is also editor of McSweeney’s Internet Tendency and author of So You Want to Be President? a humorous look at politics and campaigning to be published March 2008. His previous book, Fondling Your Muse: Infallible Advice from a Published Author to the Feeble Young Introvert was an BookSense pick November 2005. He lives in South Carolina.