I asked Mr. Henderson how he would characterize my driving, and he said, “Timid… to the point of being unsafe.” My back-seat driving, on the other hand is all confidence!

I was surprised to learn that most of you who answered this week’s driving question characterize yourselves as bad, distracted, or exceptionally cautious drivers. I’m not sure what I expected, but it wasn’t that. I dislike driving for two main reasons: My head likes to wander, so I find the whole experience of remembering where you’re going and reading signs and knowing which lane to be in incompatible with daydreaming. And I find being strapped in and forced to keep my hands on the wheel incompatible with being a restless workaholic.

I’ll tell you a little driving story, but first let me tell you where I’m giving a reading this weekend: 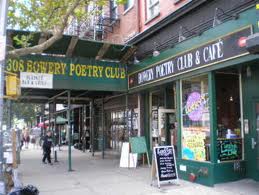 The club is right across from CBGB’s, at the foot of First Street, between Houston & Bleecker. (That’s the F train to Second Ave, or the 6 train to Bleecker.) If it looks long and expensive to you, well, hey, I was thinking the same thing. But I hope some of you come down and keep me company while my hands and voice shake at the microphone. 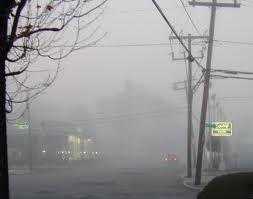 When I was fresh out of graduate school, I answered an ad for a counselor in a group home. I was just right for the job. The trouble was getting there. I’m not good with directions, so Mr. H and I did a practice run and it was pretty far away.

I have some unusual phobias related to driving, but most seem to go away if I just close my eyes. For example, I can navigate a tunnel better with my eyes closed because that keeps me from overcorrecting and hyperventilating about hitting the wall.

I felt confident in my get-the-job outfit. I am a great interviewee and I knew I’d land the job if I could just find the building. I started early, didn’t want to be rushed, didn’t want to get anything wrong. And since it was raining, I wanted extra time to perhaps blow dry my hair in a bathroom before my appointment.

What I was unprepared for was the fog storm. By the time I got on the highway, the fog became so bad it was like driving inside a thick white cloud. I couldn’t see if I was in my lane, much less see exit signs. I slowed to under 20 MPH. The amazing thing, and what made me so angry about the selfishness and impatience of other drivers, was that other cars whizzed by, despite the weather and the danger it could cause.

Somehow, though I have no memory how I did it, I found my way to an exit and pulled into a 7-Eleven parking lot. I was in a terrible mood because I didn’t know how I’d get to the interview on time (and I am never late to anything). I was mad at the weather and mad that I’d pulled off the road and was no longer able to follow the simple directions Mr. Henderson had written down for me.

I called him from a phone booth, described the fog storm, told him there was no way I could go back out there. In fact, I admitted, just before I called him, I’d called the person I planned to interview with and explained that the drive was just too far and I was sorry for any inconvenience I caused. “Are you still there?”

“Good. You weren’t saying anything. I’m so embarrassed about the whole thing. I’d rather have told them after they offered me the job. Now here’s the pesky part,” I said. “Kind of a favor.”

More quiet, so I proceeded.

“I need you to come and get me so I can follow you home.” And before he could fuss, I said, “Please don’t be mad at me. I can’t help the weather.”

Mr. Henderson listened carefully, continued his silence a while longer, then calmly asked, “How is that fog storm now?”

I looked around, and can you believe, it was gone. “It’s gone,” I told him.

“Remind me to show you where the defrost button is,” he said.

I waited in my car until he found me. Mr. Henderson is one of the kindest, least likely to anger people I know, but he suggested that I just follow him home, and when we got there, to leave him alone for a while.

Unfortunately, the very things that make some people angry, I find hysterical. I rolled up my window so he couldn’t hear me laughing. Do people really know the function of every single button in their cars? 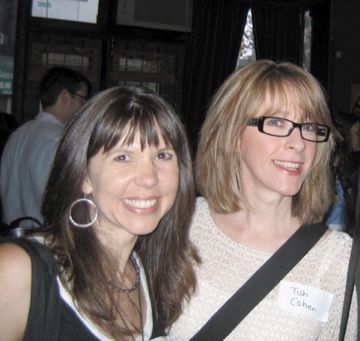 My girl, Tish Cohen, has not only had her book, TOWN HOUSE, optioned by Fox 2000, with Pulitzer Prize winning screenwriter Doug Wright (Quills, Memoirs of a Geisha) adapting it to screen, but now…

TOWN HOUSE is on the short-list for the Commonwealth Prize for Best First Book in the region of Canada and the Caribbean. How great is that?!

Thanks for those of you who left comments and stories this week. And thank you to this week’s guest: author and director, Bridgett Davis. Those who rock because they linked to LitPark this week: A Mesa de Luz, She Shoots to Conquer, the Cape Cod Times, Holly’s Fight for Justice, and The Inside Cover!

See you Monday with a new question of the week.