Sometimes my mom sends me packages filled with old photos or Most Improved ribbons or other things she finds around the house that she thinks I’ll want back. Earlier this year, she sent me a letter my grandmother sent to her in 1978.

Here’s a photo that was included in the letter. Can you guess who this little bad-ass might be?

I’m eleven here, and it was the year I flew by myself to California to stay with my grandparents.

There were a number of memorable things about that trip – one being that my mother packed a small bag for me that I wasn’t allowed to open until I was on the plane, and inside were things like flavored chapstick and lifesavers and a tiny notebook and a pen with a panda or some other wonderful thing stuck to the end of it.

And on the other side of that flight, I found that my grandparents had a special fondness for quiet. The telephone had cardboard jammed into the ringer so it never actually rang but sort of ticked. And conversations were very whispery. I remember noticing all of these things, and still making the choice to wake up early each morning so I could play several games of pop-up Perfection.

But the point of this post is actually to share the letter my grandmother sent to my mom after that visit. 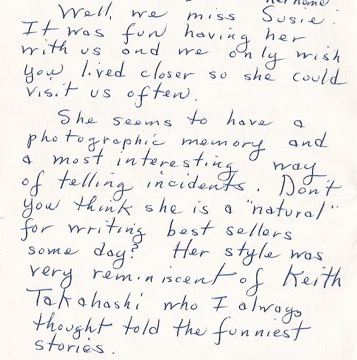 I don’t know if you can imagine what it was like to read this note all these years later, and in the throes of editing my first book – to hear my grandmother, who’s been dead for decades, cheering for me. Not sure when, in between rounds of Perfection, I was so interesting or funny. But it means a lot to me that she saw something and that she said so and that my mom thought to send this letter to me when I needed it most. 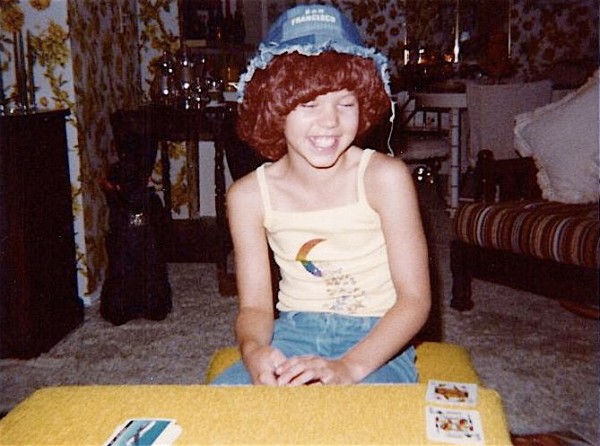 Along with the letter and that first photo, is this one that frightened Mr. H when I showed it to him. I’m not sure where the wig came from, but it would have been just like me to wear it the whole day for no reason. And only a grandmother would write this on the back of the photo: 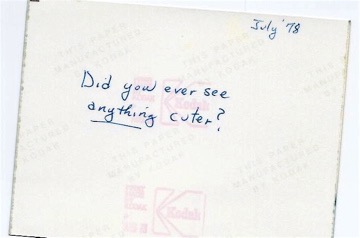 What I read this month: Stephen Hawking, The Universe in a Nutshell (Considering my son recommended it to me, I thought I’d understand it better); Leo Tolstoy, Anna Karenina (Sweeping, inspirational, and sometimes slowish); Stephen King, Misery (Loved it, and I’ve been purposefully reading books where characters are not physically able to move and yet there is an incredible sense of suspense). All of my LitPark regulars know we still read to our boys every night, but this month Mr. H did all the reading, and he picked Terry Pratchett’s Sourcery (“He’s fantastic at parodying human nature in the guise of light-hearted fantasy,” so says Mr. H).

Thanks to everyone who played at LitPark this month. One last thing… look at the photo I found (and then stole) from Saralee’s blog. This is at a Barnes & Noble, where Saralee and Ellen Meister did a joint presentation. There are two folks wearing pink tops – one is me, and the cute one is Ellen’s daughter. 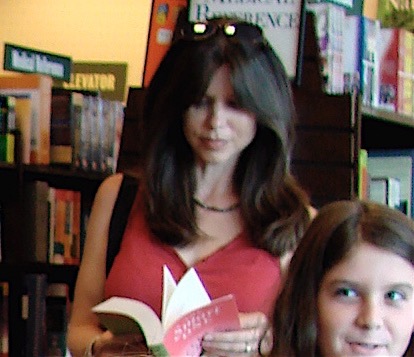 See you the first Monday of next month for a new question and a sneak peek at my October guests – a pretty incredible panel of bestselling authors!