Belle Yang is an author and painter whose honest words and vibrant illustrations tell stories about her Chinese heritage, the plight of immigrants in America, and the complex relationships between those we love. 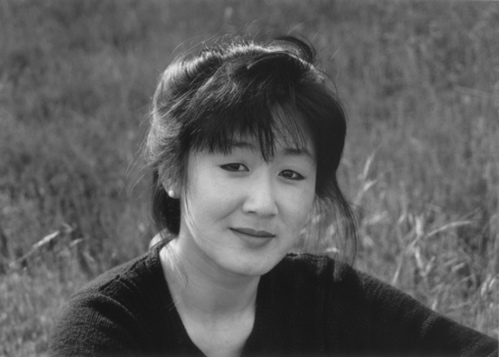 Join our conversation as we talk about art, repression, writing for children, and the power of words.

When did you know you were an artist/writer? And talk to me about how you knew—a joy in creating, rebelling against something, a need to tell an important story, …?

In 1986 I left Los Angeles, where I’d been studying art, because of a lover turned violent. He followed me to my childhood home in Carmel where I had taken refuge. This monster broke into my parents’ house and stole just about everything meaningful to us—my father’s five hundred, original poems, written in his own calligraphy, photographs galore, paintings, letters, yearbooks. All our clothes, too.

The police bungled the initial investigation: fingerprinting wasn’t done correctly, nor did the photographs of the broken window develop. When I did not hear from the police after a month, I wrote a letter to the District Attorney and the Sheriff’s department to explain my situation. I wrote the letter using an old typewriter. It took four days and I lost nearly that many pounds in weight. Within days of sending out the letter, the Monterey County investigators came to my aid. In two months, the abuser/stalker was arrested and our belongings retrieved from Simi Valley.

THAT’S when I knew I was a writer. I could move people to act through my words. When I visit kids at schools, I tell them the importance of writing clearly, because your ability to communicate via a written letter may one day save your life. Spoken words can be effective, but they dissipate if not recorded. Nothing is more powerful than the written word. I felt I’d become a painter after returning from China in 1989 and had sold my first piece through a reputable gallery. But I’ve known I was a painter since I was a child.

What a violation. But also, what a discovery: the power of your words! I love that you pass this message on to children. What’s been their response?

I study their faces, which look serious. I get a sense that my story has seeped into their little noggins—at least a clutch of them. You never know, do you? When I was in fifth grade, a poet came and read a piece about a man who is drowning in the sea and he waves to a person at a distance, who he thinks to be onshore, for rescue. That other person merely waves back. At the end of the poem, we realize both beings are drowning, waving to one another for help.

THAT really STUCK with me. So perhaps a few will remember that writing once saved a writer who came to visit and writing may also save them in some unexpected way, physically and emotionally. Wouldn’t you just love to meet one of your little readers decades down the Yellow Brick Road and be told that writing liberated them in an unimagined way?

Yes! I was once a little reader saved by a poet, myself.

Something that strikes me about your children’s books is that they go deep—you’re willing to explore sorrow and anxiety and disappointment. You could have chosen to tell some of these stories as memoir or adult novels, but you didn’t.

I’ve explored these states of being in my adult books, and I believe I have one good graphic novel for adults still in me, where I will explore sorrow and anxiety. Yet sorrow and anxiety are best set against the light, so there will be humor and joy. Just as in a painting, the colors jumps out when set next to black and the black is inkier set against bright color. This book may have to wait until I am no longer somebody’s daughter. It would not be a dark book, even if the subject is hardly pretty. My Chinese name is “Forget Sorrow,” and I forget pain quickly compared to people like my father, who has—to his own burden—an incredible memory for pain suffered. I’m glad I have poor memory. 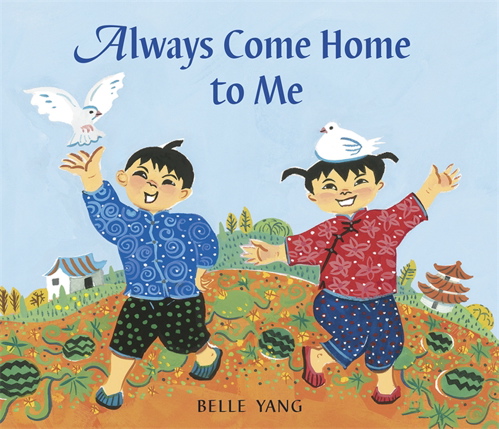 ALWAYS COME HOME TO ME

What makes you pick up the pen versus the paintbrush?

Writing and painting are nearly the same to me. With writing, I paint the images. With painting, I tell a story. In the “fine art” pieces I sell in galleries, there are always stories I write on the back of the painting to augment the image. The words are revealed in a cutout window, protected by Plexiglas. I switch tools when I feel a need to use a different part of my brain. It’s good to give one part of my brain a rest and employ the other. The part that’s being used is getting a good massage. In all my adult’s and children’s books, I have been privileged to include words and images. The adult nonfiction books by Harcourt [BABA: A RETURN TO CHINA UPON MY FATHER’S SHOULDERS and THE ODYSSEY OF A MANCHURIAN] were graced with 25 paintings. My picture books—like the brand new one coming out in February, FOO THE FLYING FROG OF WASHTUB POND with Candlewick Press—includes my own illustrations and words. I can’t wait to perform this story in front of kids. 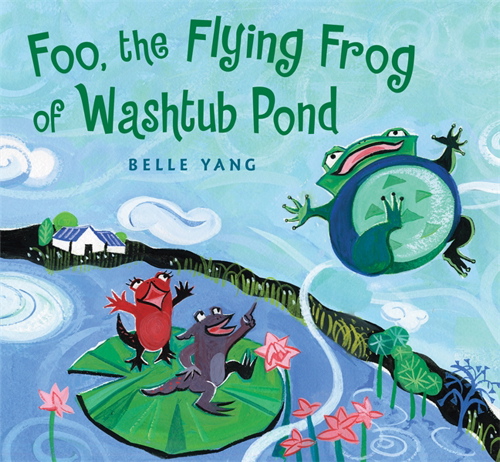 My current project, FORGET SORROW, a graphic novel (adult, “literary” comic book) to be published by WW Norton in 2010 is the perfect balance of the image/words partnership. I believe this is the format I will be working with for the rest of my life.

When I’ve been asked to write book reviews for The Washington Post, they’ve allowed me to include an illustration.

Tell me more about this graphic novel. (Mesmerizing title!)

It is about the life and death of my Manchurian great grandfather, the patriarch of a wealthy multigenerational family. He was born before the fall of the last dynasty and lived through the turmoil of warlord battles, Japanese invasion and occupation, Soviet invasion, Chinese civil war. With the Communist takeover, he was swept out of his estate and wandered a beggar. His children were afraid to take him in, as he ws black-listed as a “Declining Capitalist.” In Forget Sorrow, I explore how fortune unmasks men. My father and I tell the story alternately. It’s a story within a story.

I’d returned home after the Tiananmen Massacre, but the stalker ex-boy-fiend was still a threat, having stolen my parents’ garbage around the time of the massacre to see if I’d come home or to find any info leading to my address. And so, I was forced to stay indoors much of the time after returning to Carmel. As in The Decameron, my father entertained me with stories of old China until the human plague passed. Incidentally, after 3 years in China, I was much better able to bridge the cultural and age gap, which had existed between Pop and me.

I’m looking forward to reading it! What do you say to other authors who also have manuscripts that have taken many years to complete and many more years to sell (particularly when there are authors out there who seem to deliver a new book every year)?

Tough question, which I can’t really answer well. The one reason I’ve been able to publish slowly and fairly consistently is because I am a niche author by being a Chinese-American and an artist/illustrator. In order to get your work into the world, you have to offer what’s not already out there, something fairly rare. And you also need to be open to change. When I could not get FORGET SORROW out in the traditional prose format, when the opportunity came for the graphic novel medium, I changed. Change is always scary.

That’s one possibility, that you are a niche author. The other is that you’re a fabulous artist who connects to the heart of your readers and who is able to simplify complex emotions and relationships so children can understand what was otherwise confusing or frightening. But whatever the reason, I’m glad these books are here for us. 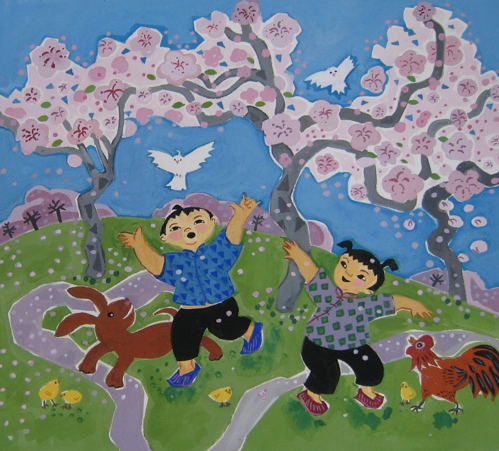 When you look through your paintings and your books, what are the themes you see again and again? What do your characters wrestle with? What do they desire?

Theme: To rescue the voices that have disappeared in the chaos of war without a complaint. When I first began to listen to my father’s stories about Chinese country folk in 1989 (after returning from China post Tiananmen Massacre), I felt incredibly sad for the men and women whose lives were so bountiful, so interesting, earthy, but who died without a murmur. Their peaceful existence was shattered, first by the Japanese who invaded Manchuria, then the Soviets, and finally the Nationalists Chinese and the Communists. The Communists continue to wage wars against their own people. Such a waste! My characters all wish to find a haven, whether geographical or emotional. 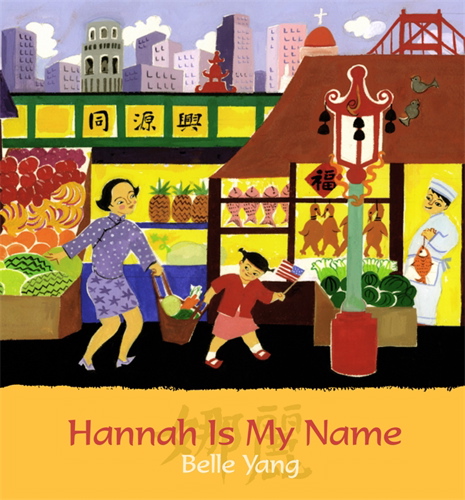 You have a real understanding of the gift of free expression. I think a lot of us who were born in America take that gift for granted. There’s a line I was reading in your book, HANNAH IS MY NAME, that made me tear up: “We don’t have to stay quiet and make ourselves small.” In another article, you said, “To swallow your voice, to keep stories buried deeply beneath layers and layers of silence is to live in a state of bondage. Stories are magic. Stories make us individuals. They make us free.” It seems like that haven you speak about has something to do with this.

The Tiananmen Massacre was bondage and silence on a societal level. I had lived with an abusive man who was violent to me on a personal level. My China experience only underscored my knowledge of the insidious Evil in society. How will Hamas and Israel stop fighting when women in a relatively liberal country like the U.S. (women of all class levels) are beaten in their own homes, just for speaking their own minds? China looks wealthy to the outside, but its citizens are beaten down every day for speaking up against pollution and corruption.

Isn’t it a bit ironic to you that I write kids’ book? The Evil of which I speak is kept from them as long as possible. We send our kids out entirely blind about the subtleties of power. In CHILI-CHILI-CHIN-CHIN, my first children’s book, it was a reaction against being ridden, used like horse or pack mule by others or by society as a whole. Someone very astute person once said, “Belle you give off a sense of brightness even when your life has had its darkness.” But you can’t know freedom of expression until you’ve been muffled.