Do you ever get intimidated by brilliant people? Tell me a story about it. 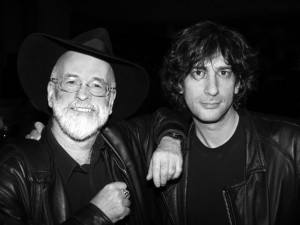 The one author I find truly intimidating is Terry Pratchett. Even before he was knighted, it seemed right to put the word Sir in front of his name. I just find his work—whether you’re looking at it from a bird’s eye view or sentence-by-sentence—to express more layers of wisdom, humor, and historical reference than I know how to juggle… and all of it without slowing down the plot.

I feel no jealousy toward Sir Pratchett; it’s more of an awe of the unattainable. And this makes his current struggle with Alzheimer’s all the more heartbreaking.  His open discussions about his disease, including his recent thoughts about assisted suicide, remind us that the window on his brilliant mind is closing, that we’ll soon be holding his very last book. 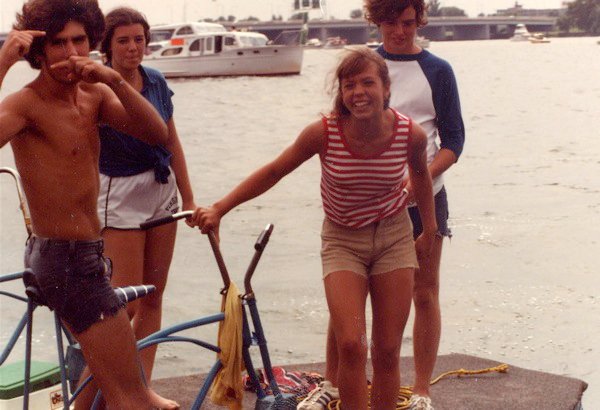 Alzheimer’s has struck close to home. My grandmother suffered from it even before her hair turned gray. And more recently, my first love’s father brought his own struggle with it into public view, documenting his descent both in books and on NPR. Tom DeBaggio, who helped Francesco and me make that sinking raft in the photo up above, died last week. There’s a very nice tribute to him by Melissa Block, and you can catch his earlier NPR pieces here: 1999, 2005, 2007, 2010. 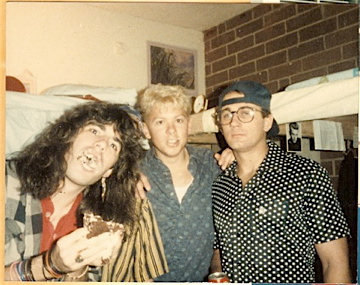 I’ll post one more photo of Fran with my brother and my “other brother,” who, by the way, gets hung in the opening scene of TRUE GRIT. And maybe my point, if there is one, is that the people we admire, even if they are brilliant beyond our reach, are just as human. And the other thing is that many of the people we admire have no idea how important they are in our lives, and maybe we should start telling them. At the very least, we should eat more cake with our mouths wide open.

In writing news, I’ve spent the past 40 days digging deep into the new book, and I’m beginning to dream of it, too. I’ll wake up in the middle of the night with characters demanding that I write something down. I love this part of the process.

There’ve been some nice reviews and interviews lately: Robert Gray talked to me about UP FROM THE BLUE’s readers over at Shelf Awareness, Meg Pokrass talked to me about mentors at Fictionaut Five, Williamsburg Regional Library blogged about my book here, Evanston Public Library blogged about it there, and then there were some really lovely print reviews for which I’m so grateful—Bill Duncan at The News-Review, Veena Sterling at the San Francisco Book Review, and Chuck Erion at The Waterloo Region Record in Ontario, Canada. Later this month, I’ll be in San Diego, talking with the wonderful Amy Wallen, first at SDwink and then at the Savory Salon. And how fun is this?! Very excited about my trip!

I’ll end with a celebration of my friend, Robin Slick’s book, DADDY LEFT ME ALONE WITH GOD, which is a roller-coaster ride full of rock stars, insecurities, and the terrifying task of guiding talented children through a golden, but potentially dangerous, opportunity. It’s a book that will break and then rebuild your heart.