We all have horror stories in this business, but today I want to hear stories about the good moments that keep you going, that make you feel like your writing matters and that it was worth it to work so long and hard on that story. 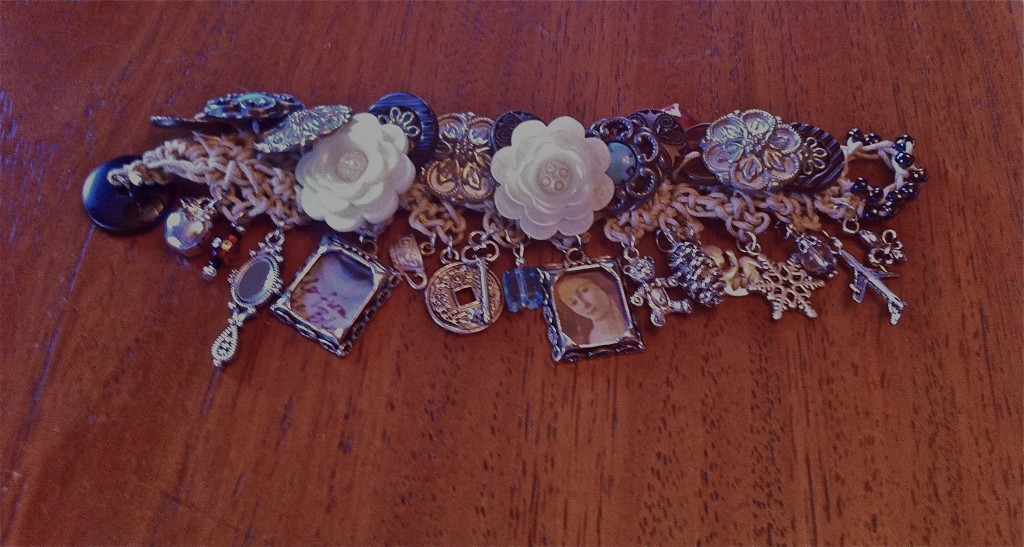 Recently I got the nicest surprise—a charm bracelet from someone who was moved by my book. The charms include a bear, an apple, a ruby, a cup, a newborn, and all kinds of other surprises drawn from Up from the Blue. It’s one of the nicest presents I’ve ever received, and I’m going to link Nancy’s website, NMC Originals, in hopes that some of the goodness flows back to her.

Our business requires much of us with no guarantees of success. We dig deep into often painful territory, rewrite and often throw out what we’ve worked on for hours, take tough feedback and the inevitable rejections. Often, what keeps us from giving up are those who make this road a little easier—responding to our writing, sharing tips and encouragement, opening doors.

Recently, the esteemed Robert Gray wrote an article for Shelf Awareness about literary friendship, and I’m very grateful to be included in that essay, along with some people I adore: Jessica Keener, Patry Francis, and Leora Skolkin-Smith.

Strangers matter, too. Thank you to The Foreign Circus Library, The Florida Review, The Year of Writing Dangerously, and to Norway’s KK magazine for the nice words!

Haven’t talked about my kids here in a while. Last week, they played a song on the radio with their School of Rock house band. The audio is here, along with some great photos taken by Tracie Smith. The radio station is WRCN 103.9, and the deejays you see in the photos are Frankie Dee, Henry K, and AJ Pero (drummer for Twisted Sister). It was a great opportunity for the kids, and they had such fun!

Let me end with an announcement of a book I was honored to blurb. Deborah Henry’s startling debut, THE WHIPPING CLUB, brings us inside a hidden page in Ireland’s history. When Ben Ellis, a Jewish journalist, becomes engaged to Irish schoolteacher Marian McKeever against their families’ wishes, Marian’s discovery that she is pregnant fuels fears that this may be one too many stresses on their upcoming marriage. Her uncle, a Catholic priest, convinces her to disappear into the Mother Baby Home where she can deliver her child in secrecy and give him up for adoption.

A decade later, haunted by her guilt and a sense that she and her husband are growing apart, Marian searches for what has become of their son. The search leads to a corrupt system of orphanages and industrial schools for boys, where fear and humiliation are used to force the children into submission.

Gripping, cinematic, and told with a poet’s touch, THE WHIPPING CLUB shows us the consequences of silence, of good people standing by, and of unchecked power. Ultimately, however, this is a story of survival, redemption, and the courage that is born of love. One of my favorite reads of the decade! Seriously.

Hope to see some of you this month in Orlando, Florida and Portland, Maine!