Talk to any successful writer and they will tell you stories of rejection and doubt, reading to empty rooms, and writing stories that tie themselves in knots. I wanted to bring those writers here to talk with you, and I could think of no one better to kick off my series, Words for the Weary, than Caroline Leavitt, who knows all about the highs and lows of being an author. She is, honestly, the most generous writer out there—an advocate for the unsung hero, a voice for writers without confidence or platforms.

Caroline is the New York Times and USA Today bestselling author of Is This Tomorrow, Pictures of You, Girls In Trouble, Coming Back To Me, Living Other Lives, Into Thin Air, Family, Jealousies, Lifelines, Meeting Rozzy Halfway. She has appeared on The Today Show, The Diane Rehm Show, and has been a judge in both the Writers’ Voice Fiction Awards in New York City and the Midatlantic Arts Grants in Fiction. She teaches novel writing online at both Stanford University and UCLA Extension Writers Program, as well as working with writers privately.

But the resume never tells the full story. Here’s the one and only Caroline Leavitt with a letter that is just for you. 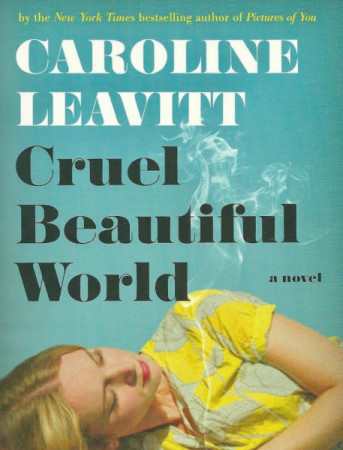 Find this amazing novel on Amazon and IndieBound.

Most of the writers I know have had messy childhoods. We write to heal. to say I am, I Am, and hope someone else says, Me, too, Me, Too. We want to be known, and that leads to the sticky subject of being known all too well, which is (sigh) fame.

Why do we want it? Maybe to feel validated. To have enough money to pay our rent, and go out to dinner and have enough to quit that horrible 9 to 5 job where you are yelled at for not dressing coherently enough. (It happened.) We want enough notice so we can write another book, or be known enough to get reviewed in top places, to be noticed, and oh, okay, to feel important.

Every writer I know feels the sting of envy. Why did that writer get that review when I didn’t? That prize? That crowd in the bookstore? I compared and despaired. Did people not like my work? Or was it me? Nothing was ever enough, until a friend of mine asked me, would I be finally satisfied if I won the Pulitzer? I knew the answer.

I had early, dramatic success with my first novel, Meeting Rozzy Halfway and I mistakenly thought it would always be that way. I was flown to NYC and interviewed by Publisher’s Weekly and by TV and radio stations. I read and appeared everywhere and even had a movie deal. Then I wrote my second novel. My publisher went out of business and the novel tanked. I got a new publisher, and guess what? They went out of business, too.  Next I had a 3 book deal with a major publisher who wasn’t really interested in marketing or promotion, and I had enough sales only to buy my husband and I dinner at a fancy restaurant. I cried a lot. I was deeply ashamed.

I wasn’t successful. I knew it. My friends were getting prizes and important reviews and bookstores so filled that people had to wait outside. When people asked me what I did, I said, “I’m a writer?” with a questioning lilt to my voice because I wasn’t so sure, since success seemed so scarce.

I roamed the bookstores and looked at books and I couldn’t figure out, why was this bestseller better than my book? Why did friends of mine get the things I yearned for—and get them so easily? Was I doing something wrong?

I cried to my friends and they commiserated. I wrote a new novel that my agent loved, my writing friends loved—and my then publisher rejected on the grounds that it was “not special” enough. I knew then that I was finished. If you haven’t made money after 8 novels, and no one knows who you are, what publisher would take the risk of buying your new book? I couldn’t’ worry about success anymore because I was obviously a failure. But a writer friend of mine wouldn’t let me give up, and got my manuscript to her editor at Algonquin. I knew nothing would happen.

Until it did. They took that non-special book and put it into 6 printings months before publication. They turned it into a New York Times Bestseller its first month out.  I was suddenly sort of famous. The people who wouldn’t take my calls were now making them to me. I was asked for blurbs, asked for essays, feted.

But was I happy?

No, I was not. I was scared because I felt pressure to make the next book even better. What if I couldn’t? What if no one liked it? What if I grew less famous instead of more?

I was devastated by insecurity, I started trying to figure out the secret. I asked my editor a while ago about a writer who seemed to be getting everything on the planet and I couldn’t tell why because I had read the novel and thought it was, well…pleasant and light.  My editor shook her head.  “That writer is adorable,” she told me. “And also very well connected.”

Somehow, that made me feel better. Some writers are insanely good at making themselves adorable to the public, at gaining a following because they are handsome human beings, or they are part of a clique of writers who always go to the same coffee shop and order the same coconut latte. That’s not me, so I’m guessing it isn’t you, either.  You have to have time to hang out to be adorable and for those of us who are solitary souls, that isn’t going to happen.

It all felt so discouraging that I stopped writing altogether. “I don’t want to do this anymore,” I told a disbelieving writer friend. “And it feels like a relief.”  And for three months it was. I didn’t write, I didn’t think about writing, I didn’t care. Instead, I lived. I had fun with my husband, with my son, with my friends. I didn’t read book reviews, but read the books I wanted to read for pleasure, not comparison.

I began to realize from being a book critic that some books I adored were savaged by other critics, and books that I had some problems with were touted.  Then, to my surprise,  one day, I felt a story simmering inside me. It had to be heard. And so I listened, and I began to write, not thinking about anything but story. I became happy, immersed in my work. I hope the book will be read, but if it isn’t, then there’s a next one, and a next one after that.

Now, when I feel a flare of envy, I turn it into good karma. Someone gets a prize I wanted? I immediately warmly congratulate them. Someone gets a rave? I send flowers. I try more and more to help other writers any way I can. It actually knocks out any jealousy. It makes me feel like a better person, and it puts things into perspective, and truthfully, we are all swimming in the same sea, so why wouldn’t it make me happy if someone got attention?

I know now that career is a long road, not a short stop. Any writer might have a Pulitzer one time, and a book that barely sells the next. It doesn’t matter. What matters to me is the writing, being in that incredibly heady state when you are in the zone and you inhabit your characters so vividly, you swear you can feel them breathing beside you. It’s that necessity to create, that deep, abiding emotion that spurs you on. It’s not commerce. It’s making art. Hey, I still have green eyes, but they’re not filled with envy anymore.

Caroline Leavitt’s latest novel Cruel Beautiful World is out in paperback this August. Visit her at www.carolineleavitt.com